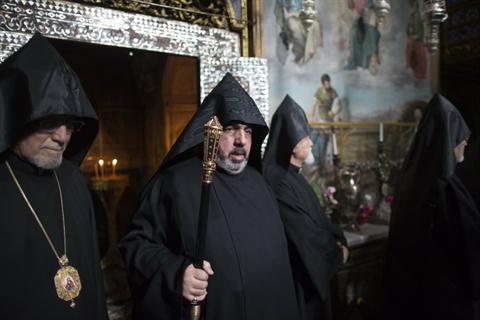 JERUSALEM: Archbishop Nurhan Manougian has been elected the 97th Armenian Orthodox patriarch of Jerusalem, one of the five custodians of Christian religious sites in the Holy Land, sources told AFP on Thursday.

Manougian, 65, replaces Torkom Manougian, who died aged 93 in October 2012, after falling into a coma following a stroke.

The new patriarch will lead the small Armenian Orthodox communities in Israel, the Palestinian territories and Jordan, as well as take responsibility for parts of holy sites including the Church of the Nativity in Bethlehem.

He was elected with 17 votes in his favour to 15 votes for Archbishop Aris Shirvanian, who had been serving as interim patriarch, a source in the Armenian community said.

Nurhan Manougian was born in Aleppo, Syria in 1948 and ordained in Jerusalem in 1971. His election must be approved by Israel and the Jordanian king.

There are an estimated 2,000 Armenians living in Jerusalem today, down from an estimated 16,000 in 1948 when the state of Israel was created.