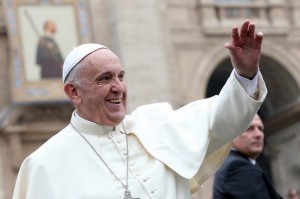 When Pope Francis gave his first speech to the European Parliament on Tuesday, the members were aware that he was not going to restrict himself to praise in the manner of John Paul II, who had called the European Union a “beacon of civilisation”. But still many were surprised at his harsh tone.

The EU had lost its way and replaced its ideals with “bureaucratic technicalities”. Europe was a haggard old grandmother, no longer “fertile and vibrant”, and had allowed a generation of young people to fester in unemployment. Returning to a favourite theme, he said Europe should help migrants from North Africa.

As the home of godlessness since the French Revolution, Europe cannot expect an easy ride from the Vatican. But as the pope begins his first trip to Turkey today, it is worth looking at what he wants to do in the Middle East, and where he might find allies if he really means that Europe is a spent force.

In going to Turkey, Pope Francis has several goals. He wants to continue his work in building bridges between the Roman Catholic Church and the eastern Orthodox Church, which split almost 1,000 years ago. At the same time he wants to highlight the plight of Christians in the Levant whose numbers are dwindling as Iraq and Syria are engulfed in war.

Behind these goals lies the outline of grander foreign strategy. From the pope’s standpoint, it is clear that America and its European allies have created a catastrophe in the Middle East and that the Vatican needs to find new allies in its attempt to preserve the Christian heritage there. According to Vatican observers, his chosen ally is Russia’s Vladimir Putin, whose country is home to the world’s largest Christian Orthodox population and, just as important, a generally well-integrated Muslim minority estimated at up to 14 per cent of the population.

Massimo Franco, the political columnist for Corriere della Sera newspaper who has written about the Francis-Putin alliance, says it is not a vote of confidence in Mr Putin or a desire to distance the Vatican from western values. Rather it is a recognition of the “contradictions, divisions and lack of strategic vision of the West” in the Middle East.

As part of his confrontation with the West, Mr Putin is now presenting himself as the guardian of religious family values in contrast to western Europe, which he caricatures as having abandoned its Christian heritage in favour of promoting gay rights. The Russian Orthodox Church has repeatedly suggested that Orthodox and Roman Catholics should make common cause as social conservatives.

When the pope speaks of Europe no longer being “fertile”, he may look at Mr Putin’s Russia and see that, for the first time since the collapse of communism in 1991, births now outnumber deaths.

The reasons for a Vatican-Kremlin alliance are compelling, particularly with the western powers distracted and impotent. Orthodox Christianity has long served as a bridge between religions in the Middle East. If the countries of the region become single-religion nations, or are divided into single-religion cantons, it will be a disaster. Historically, Russia has been the defender of Orthodox Christians in the Middle East, and more recently the supporter of secular regimes such as Syria’s.

But what form the alliance will take and what it means is far harder to assess. Pope Francis is going to Turkey in part to celebrate St Andrew’s Day with the Ecumenical Patriarch of Constantinople, Bartholomew, the Vatican’s main partner in attempts to heal the 1,000-year schism. But there can be no quick fixes with Bartholomew.

He is commonly described as the spiritual leader of the Orthodox as he is historically the first among equals in the church leadership. But that label ignores the real power dynamics. His prestige may be high but, being based in Turkey where more than 99 per cent of the population are Muslims, his flock is tiny. He has been fishing for souls in former Soviet lands. This is resisted by the Moscow-based Russian Orthodox Church, with 150 million adherents. In Russian eyes, there is only one place to do business with the Orthodox, and that is in Moscow. The idea that Moscow is the “Third Rome” – the new centre of the Christian world – has been common in Russia since the 15th century when Constantinople (the second Rome) fell to the Turks.

Tensions have increased due to the crisis in Ukraine, where eastern Christian congregations are split three ways, with some looking to Moscow and some to Rome.

A further problem for the pope is the difficulty of speaking about the fate of Christians in Turkey. He can hardly lament the rise of single-religion countries as a guest of the Turkish government. Modern Turkey became religiously homogeneous in 1923 when more than one million Greek Christians left the country as part of a forced population exchange with Greece, from where 300,000 Muslims came to Turkey. Under president Recep Tayyip Erdogan, the secular Turkish state has become increasingly identified with Islam, though he has made some small gestures to the religious minorities.

It is understood that Pope Francis wanted to stop by in northern Iraq in August on his way home from a trip to South Korea to talk about the fate of Christianity in the region, but his security forbade it.

The pope is a free spirit, and his attempts to reform the ossified Vatican bureaucracy go hand in hand with rethinking Vatican alliances. As an Argentine, imbued with scepticism about American capitalism and power projection, he can be expected to see the world differently from his European predecessors. Whether he is able to follow the diplomatic example of the Polish pope, John Paul II, who helped to change the face of eastern Europe, remains to be seen.

Alan Philps is a commentator on global affairs.