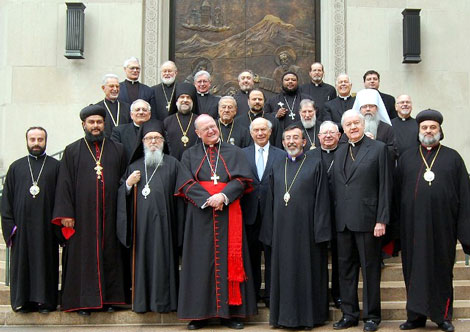 Participants in the ecumenical gathering at St. Vartan.

NEW YORK – (December 11, 2012) Archbishop Khajag Barsamian, Primate of the Diocese of the Armenian Church of America (Eastern), hosted an ecumenical gathering at the Diocesan Center in honor of the elevation of Archbishop Timothy Dolan, the Roman Catholic Archbishop of New York, to the rank of Cardinal.

Leaders of the Roman Catholic, Eastern Orthodox, and Oriental Orthodox churches came together at St. Vartan Armenian Cathedral on November 30 for a prayer service, followed by a reception to honor Cardinal Dolan. Also attending the afternoon gathering was Rabbi Arthur Schneier, the Founder and President of the Appeal of Conscience Foundation.

“To our dear brother, Cardinal Dolan, I want to say, as I have said before, that I hope you will always consider this Diocesan Center as your home-as it is a home for all of us gathered here today,” Archbishop Barsamian said in welcoming remarks. “And in feeling at home here, I pray that we also feel part of the same family: bound together by shared hopes-both temporal and eternal; a shared mission; and a shared sense of gratitude for God’s blessings.”

Cardinal Edward Egan, the former Roman Catholic Archbishop of New York, delivered the invocation. He thanked Archbishop Barsamian for organizing the day’s program and congratulated Cardinal Dolan on his elevation. Archbishop Dolan was elevated to the College of Cardinals by Pope Benedict XVI in February 2012.

Cardinal Dolan expressed his gratitude to Archbishop Barsamian for the warm reception, and recalled how in the fall of 2009 the Eastern Diocese hosted a similar gathering to mark Dolan’s installation as the 10th Roman Catholic Archbishop of New York. “You have been a source of hospitality and warmth from the beginning,” Cardinal Dolan said.

He said that it is important to maintain the bonds of friendship shared by the various churches in New York, especially in a culture that sometimes characterizes religion as a source of violence. “Now more than ever we need the unity and fraternity that we have here in New York,” he said, adding that together the churches can stand up to injustice and seek peace.

Archbishop Demetrios, Primate of the Greek Orthodox Church in America, spoke about the life of St. Andrew the Apostle, whose feast day was observed on November 30. “This is a great day to celebrate,” he said, adding, “We are glad to be with our beloved brothers on this occasion.”

He congratulated Cardinal Dolan on his elevation and commended his tenacity and his readiness to defend the Christian faith. “It is important that we have leaders with a determination to change the world,” Archbishop Demetrios said.

Referring to the crises in the Middle East-including civil war in Syria, and ongoing conflicts in Egypt, Lebanon, and Israel-he added that ecumenical gatherings “increase our awareness of our need for each other and our tremendous potential to work together.”

Metropolitan Mor Cyril Aphrem Karim, leader of the Syriac Orthodox Church of the Eastern United States, remarked on Cardinal Dolan’s many achievements in a short period and his commitment to serving his flock. “At a time when faith has diminished in public quarters, it is important to bring faith to the public sphere,” he said.

He also spoke of the suffering in Syria, and called on religious leaders to pray and to advocate for peace in the region.

Rabbi Schneier reflected on the importance of living one’s faith through good works. “You serve not only your church, but you serve all of God’s children,” he said to Cardinal Dolan.

He went on to speak on the blessings of living in a land of freedom, and stressed the need to fight for human rights in parts of the world where freedoms are more precarious. “The United Nations has to take a stand on the protection of Christian minorities in the Middle East,” he said, adding that the world must not remain “silent in the face of suffering.”

Metropolitan Tikhon presented Russian Orthodox icons to Cardinal Dolan and to Archbishop Barsamian. “We offer you our prayers, and on behalf of the Orthodox Church we look forward to working with you,” he said.

Archbishop Barsamian presented Cardinal Dolan with a mother-of-pearl Bible, carved in Jerusalem. “Our beloved Archbishop of New York represents the very best spirit of this great city: its cosmopolitan outlook, its compassion for the poor and afflicted, its aspiration to beauty, its appreciation for the everyday virtues of family and community,” Archbishop Barsamian said. “As a New Yorker, Cardinal Dolan is strongly committed to his own tradition; but also as a New Yorker, he is a loving supporter-a cheerleader, even-of the many noble traditions that have made this country strong, great, and good.”

At the conclusion of the afternoon meeting, Metropolitan Philip, the Antioch Orthodox Church’s Archbishop of New York and Metropolitan of All North America, delivered a benediction.