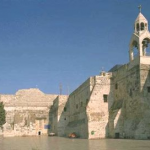 Church of the Nativity

When it comes to fixing the church roof, rarely has it been so difficult to reach agreement as at the Church of the Nativity in Bethlehem. But, after a centuries-old stand-off between Greek Orthodox monks and rival religious sects, it looks as if the reputed birthplace of Jesus may finally get the renovation it so badly needs.

With Palestine’s recent admission to Unesco, the body responsible for protecting historic sites, the Palestinian Authority hopes to win recognition for the 1,500 year-old basilica as a World Heritage site, the first step towards tapping the UN’s cultural body for the millions of dollars it needs to fund repairs.

After centuries of neglect that experts believe have damaged the frescoes beyond repair, Palestinian officials say that the most urgent renovations should now go ahead next year. “We will start with the roof,” said Ziad al-Bandak, an adviser to the Palestinian Authority on Christian affairs. “Hopefully we can start after Easter.”

Experts estimate the cost of the entire renovation could reach between $10-$15m (£6.5-£9.7m). The most urgent repair of the leaking roof comes in at roughly €1.5m, Mr Bandak said, some of which money has already been raised. Palestinian officials say the rest will depend on Unesco, itself facing a $65m funding cut from the United States for its decision to admit Palestine.

The Church of the Nativity is among the oldest churches in the world, surviving earthquakes and fires, and more recently, the 2002 siege of Bethlehem, when Palestinian militants took refuge in it. But it is the explosive tensions between the Christian custodians that are the greatest threat to the basilica.

The three communities with rights to the church – the Greek Orthodox, the Armenian Orthodox and the Roman Catholics – can all find the money to repair it. But none of the three sects has been willing to allow the others to pay for repairs, fearful that it will give the others a right to a part of the church that is not theirs.

“If you repair the roof, under Ottoman law, you own the structure,” said Raymond Cohen, who has written a book about renovations at Jerusalem’s Church of the Holy Selpuchre. “In the pub, you want somebody else to buy the round. In the Church of the Nativity, it’s the opposite. Everyone wants to pay.”

Tempers can quickly flare over the most basic of tasks. Several years ago, monks flew at each other after Greek Orthodox monks encroached on the Armenian area during a pre-Christmas clean-up, prompting the intervention of Palestinian police.

The PA has sidestepped these rivalries by proposing to oversee the repairs, drawing for some funds on its own coffers but mainly on the international community, a suggestion accepted last year by religious leaders. It is, as one Palestinian official quipped, “the most successful example of Palestinian negotiations yet”.

But the intervention comes not a moment too soon. In a damning Unesco report from 1997, the authors wrote that, when it rained, large puddles formed on the floor of the church, that dripping rainwater had damaged some of the wall and floor mosaics “beyond repair” and warned that loose masonry posed a serious threat to the safety of tourists. The roof hasn’t been replaced since the 15th century, when King Edward IV of England sent lead, and Philip, Duke of Burgundy, dispatched wood and iron.