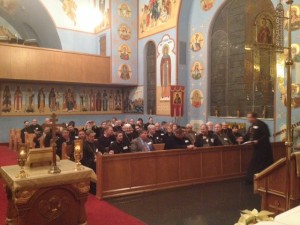 BETHLEHEM, PA [OCA] – His Grace, Bishop Mark of Baltimore, was nominated to fill the vacant Episcopal See of the Diocese of Philadelphia and Eastern Pennsylvania at a special Diocesan Assembly at Saint Nicholas Church here on Friday evening, January 17, 2014.

Bishop Mark has served as the Diocese’s Administrator since 2012. His name will be forwarded to the Holy Synod of Bishops for canonical election.

His Grace, Bishop Melchisedek, Bishop of Pittsburgh and Western Pennsylvania and Locum Tenens of the Diocese, called the Assembly to order, after which Archpriest John Jillions, Chancellor of the Orthodox Church in America, read greetings from His Beatitude, Metropolitan Tikhon, offered thanks to the Diocesan Search Committee for its dedicated work, and explained the nomination process.

Bishop Melchisedek stated that two candidates had been vetted by the Holy Synod of Bishops, adding that while one candidate accepted, the other declined.

The Assembly closed with the celebration of a Service of Thanksgiving.