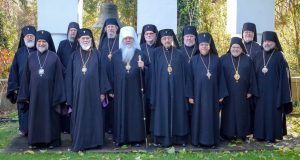 SYOSSET, NY [OCA] The Fall 2017 Session of the Holy Synod of Bishops of the Orthodox Church in America was held at the Chancery here November 14-17, 2017.

The session opened on Tuesday, November 14 with the celebration of Prayers for the Opening of a Council and a Panikhida for the departed family members of the Holy Synod and all hierarchs of the OCA.  In his opening address, His Beatitude, Metropolitan Tikhon reported on the ongoing development of the “Four Pillars of the Church” document which he plans to release to the Church in the coming months.  He thanked the OCA’s officers and Chancery staff for their good work and reported on a number of issues, including his recent travels and initiatives.

Reports were offered by Archpriest John Jillions, Chancellor, who presented the revised document, “Guidelines for the Reception and Transfer of Clergy into the Orthodox Church in America,“ which the hierarchs will continue to review.

Archpriest Eric G. Tosi, Secretary, reviewed the ongoing redesign of the OCA web site, offered an update on the renovation of the Archives, and presented a report on the highly successful third OCA Mission School.  He reported that the new metric book is in the final stage of printing, reviewed the Chancery/Department Travel Policy, and presented the minutes of the Fall 2017 Metropolitan Council Session, which were blessed by the hierarchs.

Melanie Ringa, Treasurer, presented an overview of the finances for 2017 and presented the 2018 budget as passed by the Metropolitan Council.  The Holy Synod blessed the budget.

Judge E. R. Lanier reported on legal issues, including an update on current cases and issues, as well as the development of a mediation committee and a legal advisory committee.  Bernie Wilson reported on the work of the Office of Review of Sexual Misconduct Allegations [ORSMA] and the Sexual Misconduct Policy Advisory Committee [SMPAC].

Updates on the work of the Church’s ministry departments were offered.

Hieromonk Nikodhim [Preston] reviewed the work of the Department of Pastoral Life.  The hierarchs approved the concept of the “Brother to Brother” assistance program that will be further reviewed by department members.

In conjunction with the presentation of Priest John Parker, Chair of the Department of Evangelization, the Holy Synod blessed five planting grants for 2018.  Returning grants will be received by missions in Rollo, MO; Waxahachie, TX; and Wasilla, AK, while missions in Rogers, AR and Louisville, OH will receive grants for the first year.

Archpriest Ian Pac-Urar, Chair of the Department of Continuing Education, updated the hierarchs on the Department’s most recent efforts.

At the recommendation of the Board of Theological Education, the Holy Synod approved the candidacy for ordination of several individuals.  The hierarchs also considered preliminary plans for a summer exchange program with the Church of Russia in partnership with the Saints Cyril and Methodius Theological Institute of Post- Graduate Studies and blessed further steps to be taken.

With regard to the 19th All-American Council, slated to convene in Saint Louis, MO in July 2018, the Holy Synod approved the revised agenda which now includes six afternoon forums.  The hierarchs also discussed the speakers for the Council and approved a financial assistance plan to help offset travel and participation costs for delegates from the Dioceses of Alaska and Mexico.

Protopresbyter Leonid Kishkovsky, Director of External Affairs and Interchurch Relations, reviewed a number of issues affecting world Orthodoxy and offered a review of a number of recent activities.  His Grace, Bishop Daniel reported on his recent visit to the OCA’s Representation Church of Saint Catherine in Moscow.  The Holy Synod approved the candidacy of the new OCA Representative to the Moscow Patriarchate.

Archdeacon Joseph Matusiak presented a report on the Stewards of the Orthodox Church in America [SOCA] and reviewed the current annual Steward Sunday appeal.

A photo gallery is available on the OCA web site and Facebook page.