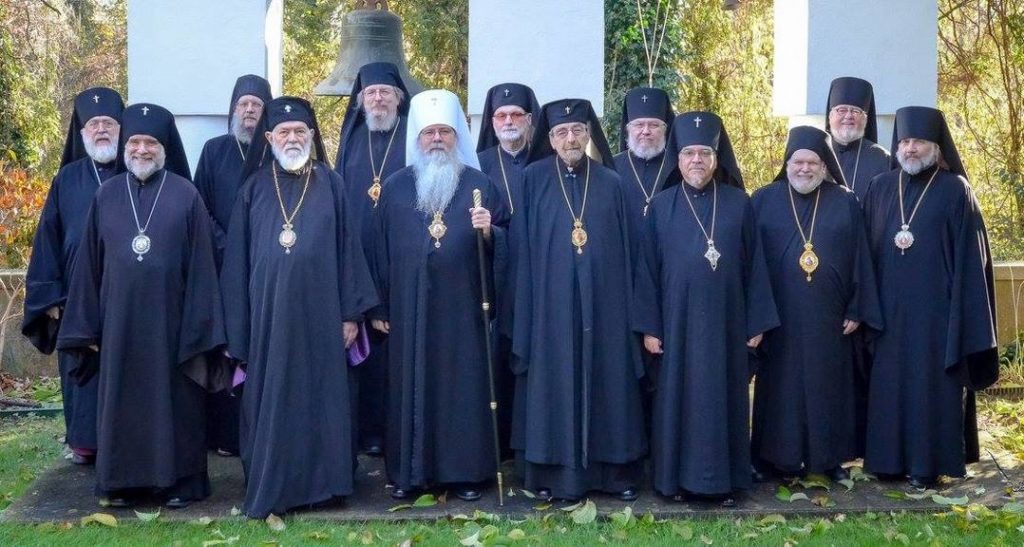 SYOSSET, NY [OCA] The Fall Session of the Holy Synod of Bishops of the Orthodox Church in America was held at the Chancery from Tuesday, October 23, 2018 through Thursday, October 25, 2018.  As reported earlier, the gathering opened with the celebration of the Divine Liturgy in Saint Sergius of Radonezh Chapel, at which His Beatitude, Metropolitan Tikhon presided, after which the OCA’s outgoing officers were especially recognized for their years of devoted service to the Church.

The Holy Synod invited the diocesan chancellors and treasurers to participate in their first session, which focused on matters related to clergy demographics, clergy formation and youth ministry.  That afternoon, the chancellors and treasurers met apart from the Holy Synod, focusing their discussions on finances, common issues with regard to the organization and direction of Church-wide ministries, the development of a sound understanding of financial stewardship, and related issues of mutual concern.  At the conclusion of their meeting, the chancellors and treasurers unanimously passed a motion extending “profound gratitude to the outgoing members of the Central Church Administration, Chancellor V. Rev. John Jillions, Secretary V. Rev. Eric Tosi and Treasurer Melanie Ringa for their service to the Church in general, but especially in facilitating the annual meetings, providing information that is essential to us all and support for ongoing cooperation between the diocesan chancellors and treasurers.  Their consistent desire and efforts to serve and effectively support the chancellors and treasurers has established a vitally important precedent in the administration of the Church, in an honest, respectful and charitable manner in the discussion of often difficult topics.  May the Lord grant them rich blessings in their new ministries in His Church.”

The Holy Synod extended an invitation to the chancellors and treasurers to again participate in their first session at the Fall 2019 Session of the Holy Synod.

At its second session, the Holy Synod heard reports from Metropolitan Tikhon on the Chancery restructuring, his proposal on a Church-wide youth program in relation to the funds raised at the 19th All-American Council and on the vetting process for potential episcopal candidates.  The Holy Synod heard a report from His Eminence, Archbishop Benjamin, on plans for the celebrations of the 225th anniversary of the Alaskan mission to Kodiak and the 50th Anniversary of the glorification of Saint Herman and the granting of the Tomos of Autocephaly.  A schedule was developed by which each of the OCA’s 13 dioceses will be welcomed in Alaska during a 13-week period throughout the anniversary year.  The Holy Synod will gather in Alaska August 5-10, 2020 to commemorate the canonization of Saint Herman.  The 50th Anniversary of the granting of Autocephaly will be marked by a Church-wide celebration at Saint Nicholas Cathedral, Washington, DC, later in the year.  A commemorative book will be published in conjunction with the celebration.

As recently reported, the Holy Synod approved the candidacy of Archpriest Alexander Rentel as the new Chancellor of the Orthodox Church in America, who will assume his new duties on January 1, 2019.

The following reports were heard by the Holy Synod: