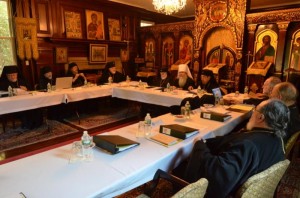 SYOSSET, NY [OCA]  On Tuesday, October 21, 2014—theopening day of the fall session of the Holy Synod of Bishops of the Orthodox Church in America—His Grace, Bishop Irénée of Québec City and Igumen Paul [Gassios] were canonically elected to the vacant Episcopal Sees of Canada and Chicago and the Midwest. In addition, the Holy Synod elected Igumen Daniel [Brum] to serve as Auxiliary to His Eminence, Archbishop Benjamin of San Francisco and the West as Bishop of Santa Rosa, CA.

Bishop Irénée, who had been serving as Administrator of the Archdiocese of Canada, was nominated by delegates to the Extraordinary Archdiocesan Assembly held in Gatineau, QC on October 2, 2014. Igumen Paul, who had served as Administrator of the Diocese of the Midwest, was nominated by delegates to the Special Midwest Diocesan Assembly held in Broadview Heights, OH, on October 7. [See related stories here and here.]

Born in Montréal, Quebec on December 25, 1948, Bishop Irénée received a BA in Slavic Studies from the University of Ottawa in 1971, after which he began studies at Holy Trinity Seminary, Jordanville, NY. He was accepted as a novice at Holy Trinity Monastery and placed under the spiritual guidance of Archimandrite Kiprian. In 1974, he was tonsured a Rassophore monk. The following year, he was tonsured a Stavrophore monk with the name Irénée, in honor of the sainted hieromartyr of Lyons.

In 1978, he was blessed to serve in France. In May of the same year, he was ordained to the diaconate in Brussels, Belgium, and in August to the priesthood in Geneva, Switzerland. He continued to serve in France until 1982, at which time he returned to Canada to serve Montréal’s French mission. He and the mission’s faithful were received into the OCA in 1986.

In 1992, Hieromonk Irénée was elevated to the dignity of Igumen by His Grace, Bishop Seraphim of Ottawa, to care for the French language monastics in Québec. He also served as a supply priest to the parishes in Montréal, Ottawa, Toronto and Québec City.

In April 2009, the Holy Synod of the OCA elevated Igumen Irénée to the dignity of Archimandrite and elected him as an Auxiliary Bishop in the Archdiocese of Canada with the title of Bishop of Québec City. In October 2009, ten bishops participated in his consecration to the episcopacy at Ottawa’s Annunciation Cathedral. On October 1, 2010, the Holy Synod appointed Bishop Irénée as Administrator of the Archdiocese of Canada.

Igumen Paul was born to Nicholas and Georgia Gassios, natives of Castanea, Greece, in Detroit, MI on April 6,1953. He, his parents, and his sister Agatha lived in Detroit until their move to the suburbs in 1973.

As an infant, he was baptized with the name Apostolos, in honor of the holy Apostle Paul, at Saints Constantine and Helen Greek Orthodox Church, Detroit, MI—his home parish for the first 28 years of his life.

He graduated from Detroit’s Cooley High School, where he was a member of the National Honor Society, in 1971, after which he enrolled in Wayne State University as a history and psychology major. After his graduation in 1976, he worked with emotionally and physically abused children. He furthered his education at Wayne State, from which he received a Master of Social Work degree in 1980, and continued to work in his chosen field.

After ordination, he was assigned Priest-in-Charge of Saint Thomas the Apostle Church, Kokomo, IN, which he served until June 2005, after which he resided at Saint Gregory Palamas Monastery, Hayesville, OH until May 2006. He briefly served as Rector of Archangel Michael Church, St. Louis, MO and the Nativity of the Holy Virgin Church, Desloge, MO before his transfer to the OCA’s Bulgarian Diocese and assignment as Dean of Saint George Cathedral, Rossford, OH in 2007. In August 2014, he was named Administrator of the Diocese of the Midwest and relocated to Chicago.

On October 20, 2014, he was tonsured to monastic rank with the name Paul, in honor of Saint Paul the Confessor, Patriarch of Constantinople.

Igumen Daniel [Brum] was born in Fresno, CA, on November 16, 1954, the oldest of three children born to Orville Antonio and Marjory Brum. He was raised in Riverdale, CA—a community predominantly comprised of Portuguese-American families—where he graduated from high school in 1973.

Raised in the Roman Catholic tradition, he enrolled at Saint Patrick’s College Seminary, Mountain View, CA, where, during his freshman year, he first encountered the history of the Orthodox Church and frequently attended services at Saint Nicholas Church, Saratoga, CA, at that time under the rectorate of Mitered Archpriest George Benigsen, who welcomed him and encouraged him to explore Orthodox Christianity further. In the early 1970s, he began reading the Church Fathers and tried to integrate what he was learning of Orthodoxy into his regular courses of study.

He received a BA in Humanities, with specialization in history, philosophy and English literature, from Saint Patrick’s College Seminary in 1977, after which he entered Saint Patrick’s Seminary, Menlo Park, CA, where he continued the study of Church history. In 1981, he received his Masters of Divinity degree and was ordained to the Roman Catholic priesthood. After ordination, he served in a variety of capacities and was especially involved in the Portuguese-American community. He also served as diocesan Director of Vocations and as editor of the Portuguese-language page of the diocesan newspaper.

In 1992, he was asked by his bishop to pursue further studies and, in 1995, he completed the academic work and received a degree in canon law (JCL) from the Catholic University of America, Washington, DC. His relationship with Orthodoxy continued as he continued research within the context of the Orthodox Church councils. During this time, he seriously contemplated conversion to Orthodox Christianity—a difficult decision given his background and ties. Ultimately, it was his study of canon law that impelled him to respond to the call to embrace Orthodox Christianity.

After completing his course of studies in canon law, he returned to his diocese and was assigned to the Diocesan Tribunal, as well as to a small mission parish in a rural setting. During this period, his feelings and perceptions about Catholicism, based upon years of personal experience and reenforced through informal and formal study, were confirmed, while his growing love and appreciation for the Orthodox Church were increasingly confirmed and strengthened.

He petitioned to be received into the Orthodox Church in America in 1997 and was vested as an Orthodox priest by His Grace, Bishop Tikhon of San Francisco and the West at the Monastery of Saint John of Shanghai and San Francisco on the Saturday of the Praises of the Theotokos the same year, after which he served briefly at Saint Nicholas Church, Saratoga, CA before his assignment to Saint Paul the Apostle Church, Las Vegas, NV. In August 1998, he was transferred to the omophorion of His Eminence, Archbishop Peter and the Diocese of New York and New Jersey and assigned Rector of Saint Gregory Palamas Mission, Flemington, NJ, where he gained a new appreciation for the hard work and special challenges faced by mission priests. In 2000, he was appointed Secretary to His Beatitude, Metropolitan Theodosius and, later, to His Beatitude, Metropolitan Herman. He also served on several Church committees and commissions, including the Canons and Statute Commission, the Legal Advisory Board, and the Canonization Commission, and in numerous other capacities.

In December 2005, he expressed his desire to return to parish ministry and, in July of the following year, he was transferred to the Diocese of San Francisco and the West and appointed Rector of Saints Peter and Paul Church, Phoenix, AZ, which he continues to serve. In October 2006, he was elected as a member of the Diocesan Council.