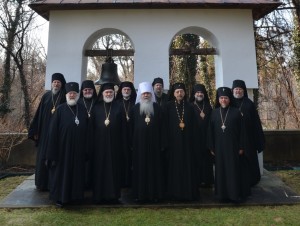 Members of the Holy Synod of Bishops of the OCA

OTTAWA, ON, CANADA [OCA] – The Holy Synod of Bishops of the Orthodox Church in America held a summer meeting at the headquarters of the Archdiocese of Canada, in conjunction with a spiritual retreat for the hierarchs.  The gathering took place at Annunciation Cathedral in Ottawa, ON, beginning on Tuesday, June 24, 2014 with the celebration of the Hierarchical Divine Liturgy by His Beatitude, Metropolitan Tikhon, Primate of the OCA, on the Feast of the Nativity of Saint John the Baptist.

Among the items considered in the deliberations of the Holy Synod were:

The next meeting of the Holy Synod is scheduled for October 21-24, 2014 at the OCA Chancery in Syosset, NY.