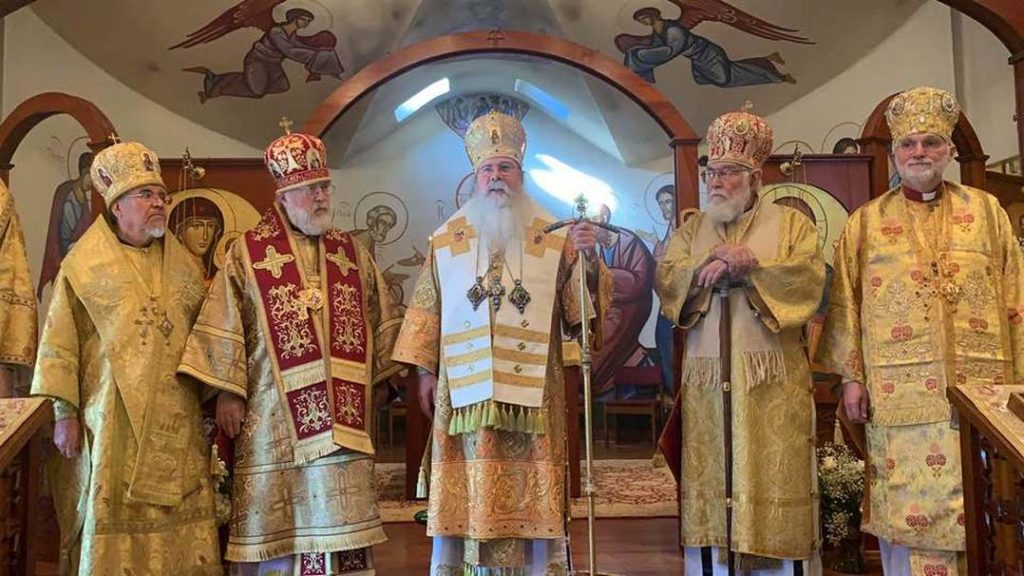 On Wednesday, November 13, the Holy Synod of Bishops of the Orthodox Church in America celebrated the Divine Liturgy for the feast of Saint John Chrysostom, and commemorated the seventh anniversary of the election of His Beatitude, Metropolitan Tikhon.

At the conclusion of the Divine Liturgy His Eminence, Archbishop Michael of New York and New Jersey, Secretary of the Holy Synod, read the following proclamation of the Holy Synod announcing the anniversary celebrations for the Canonization of Saint Herman of Alaska, and the reception of the Tomos of Autocephaly.

Proclamation of the Holy Synod of Bishops
of the Orthodox Church in America
Announcing the Anniversary Celebrations for the
Canonization of St. Herman of Alaska, and the
Reception of the Tomos of Autocephaly

We beseech our heavenly Father, the Author of every good gift, to grant to everyone who hears and reads these words an outpouring of the great and manifold gifts of faith, knowledge, and salvation that can only be found in Him. Through the revelation of Him in the person of His Son, our Lord Jesus Christ, by the grace of the Holy Spirit, may our faith in Him become ever greater, our knowledge of him more profound, and may we all attain unto the salvation that He alone offers. From of old, the great Prophet David has exhorted God’s faithful people, “Know that the Lord is God! It is he that made us, and we are his; we are his people, and the sheep of his pasture (Ps 100.3).” Our Great God has created us and made himself known to us, and we have become his people, the Church. While the members of our Church live and work in Canada, the United States, and Mexico, they and we are united with the men and women throughout the world and from all the ages who share the same Catholic faith that was delivered to the Apostles once for all time. On behalf of this faith, we labor; for this knowledge, we rejoice; to this salvation, we hope.

Throughout this anniversary year, the Orthodox Church in America will honor our Venerable Father Herman of Alaska. The Psalmist assures us that “God is glorified in the council of his saints (Ps 89.7),” and so as we celebrate this holy man, St. Herman, as we come to know his deeds, and works, and words, all of us will come to know ever more the glory of God revealed in him. We exhort everyone to come to this same knowledge, to have their faith strengthened and nourished by honoring this great saint for all Orthodox Christians. Our Venerable Father Herman of Alaska stands as a patron for all Orthodox Christians in America according to the inscrutable providence of God. He was a simple monk, but he serves as a great example for all Christians. He was well versed in the scriptures and the traditions of the Church. He maintained an ardent faith in Jesus Christ. He acted as a protector and defender of the downtrodden, the weak, the widows, the orphans. He labored in the fields of evangelization of the native Alaskans – people of this continent. Blessed is our God who has raised up this simple monk, our Father Herman, as a great and highly exalted man of God, who even now serves the faithful as the brilliantly shining North Star, guiding the Church to the salvation given by our Lord Jesus Christ.

Since receiving the gift of autocephaly the Orthodox Church in America has continued to hold firm the faith of the Apostles, the faith of the Fathers, the faith of the Orthodox, the faith that makes fast the inhabited world. In our Churches, homes, Chapels, monasteries, seminaries, and institutions throughout the United States, Canada, and Mexico, our communities give glory, honor, and worship to the one God and Father, to our Holy Lord Jesus Christ, and to the Holy Spirit. The Holy Synod oversees Church life, ministering to the flock entrusted to it by the grace of God, with all canonical order and in fidelity to the tradition of the Church. At every level of ecclesial experience, our Church seeks to resolve its internal problems in a conciliar manner with the fullness of the Church according to the tradition it has received. The Orthodox Church in America gives thanks to God for the great blessings he has given us, and also to the communion he has allowed us to maintain through our common faith with the other local Orthodox Churches.

In this coming year, the Holy Synod of the Orthodox Church in America is pleased to announce that these anniversaries will be marked by three Divine Liturgies concelebrated by the Holy Synod and guest hierarchs and clergy. The first will be at the Memorial Day Pilgrimage at St. Tikhon’s Monastery, May 25, 2020. The second will take place during the annual pilgrimage to Spruce Island, Alaska, on August 9, 2020. The third will be at St. Nicholas Cathedral in Washington, D.C., in conjunction with the Fall Regular Meeting of the Holy Synod, November 14, 2020. In addition to these Churchwide celebrations, dioceses and deaneries will also celebrate these anniversaries in different ways. We also look toward the publication of educational and liturgical works to mark these anniversaries.

Finally, we give thanks to God for His rich gifts he has bestowed upon us so that we might serve his glory: St. Herman, autocephaly, and the communion we have with all Orthodox Churches. We ask him to bless the Church we have been entrusted with as the Holy Synod, so that we might evermore praise, bless, and worship our One God: Father, Son, and Holy Spirit, now and ever and unto ages of ages. Amen.