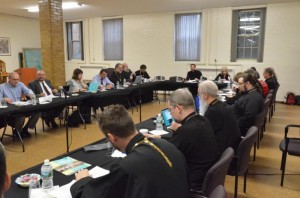 Metropolitan Council of the Orthodox Church in America concluded its spring session on Thursday, February 18, 2016.

The meeting was chaired by His Beatitude, Metropolitan Tikhon.  In attendance were the members of the Standing Synod of Bishops—His Eminence, Archbishop Benjamin; His Eminence, Archbishop Michael; and His Grace, Bishop Paul.  Also participating were the OCA’s Officers—Archpriest John Jillions, Chancellor; Archpriest Eric G. Tosi, Secretary; and Melanie Ringa, Treasurer.

After an opening Service of Intercession on Tuesday, February 16, Metropolitan Tikhon welcomed Council members, especially those attending for the first time.  He also acknowledged with gratitude the work of those whose terms had expired.  To illustrate how pastoral ministry is the Church’s “most important task,” he shared a video of his recent visit to a young OCA member suffering from cancer.  He went on to say that the Church must “provide all of mankind with the possibility of entering the Kingdom of Heaven… through the healing of souls and bodies; through prayer and spiritual growth; through good stewardship of our personal and collective talents, resources and assets; through our outreach and missionary endeavors manifest in our love for our neighbors; and through living and offering, as a local Church, our experience to the world through healthy parishes and Christ centered families.”

Turning his attention to his ongoing work on his “The Apostolic Work of the Church: Building the House of the Lord in Our Lands”—designed to provide a “guiding framework for the Orthodox Church in America” during the next triennium and beyond—Metropolitan Tikhon spoke of the four “pillars” of Church life: spiritual life, stewardship, evangelism and outreach, and external relations.  He announced that in the coming year a series of videos and presentations highlighting these “pillars” will be made available for diocesan and parish use.

After a brief review of the history of the OCA’s autocephaly, Father John Jillions reported on his work with the Department of Pastoral Life and related projects, including a projected update of the Clergy Handbook.  He also recounted the work of ORSMA and SMPAC and recounted the current status of cases and ongoing reviews of the PSP with the Holy Synod of Bishops.

Father Eric Tosi offered an overview of his work and reviewed the Metropolitan Council’s processes and procedures.  He spoke about various insurance issues, including the possibility of Religious Expression coverage.  He also presented a proposal for an update of the OCA web site—the first in over five years—and presented a prospectus on a the redesign project.

Other reports included a report on the progress of the work of the Archives Committee by Alexis Liberovsky, Archivist.

Metropolitan Council committees also presented reports.  The Charity Committee reported on a new web page and new initiatives with regard to charitable contributions, while the Human Resources Committee reported on its updating of the Employee Handbook and work on organizational issues.  The Internal Governance Committee presented the updated Metropolitan Council Handbook, which was approved.  A revision in the Metropolitan Council’s committee system was discussed, while the 2008 Best Practices documents were reviewed.  The recommendation to appoint D’Arcangelo and Company LLP as the OCA’s external auditors was approved, as were the appointments of John Skrobot and Dimitri Pletz as internal auditors.

Wednesday, February 17, opened with the celebration of the Divine Liturgy by Archbishop Michael at the Chancery’s Saint Sergius of Radonezh Chapel, after which plenary sessions resumed.  Highlights include the following.

The remainder of the day’s sessions was dedicated to an open discussion on Metropolitan Tikhon’s presentation on the “four pillars” of Church life, seminary funding, training of clergy and seminarians, evangelism initiatives and organizational issues related to the OCA’s office/committee/department system.

Thursday’s session opened with the report of the OCA Pension Board.  Protopresbyter Leonid Kishkovsky, Director of External Affairs, updated Metropolitan Council members on a variety of matters, including the Great and Holy Council, the Assembly of Canonical Orthodox Bishops of the USA, relations with other Orthodox Churches, the recent meeting between Pope Francis and Patriarch Kirill, the recent meeting of the Office of External Affairs and Interchurch Relations, and the status of Saint Catherine Representation Church in Moscow.

The Metropolitan Council is the permanent executive body of the Church Administration which exists for the purpose of implementing the decisions of the All-American Council and continuing its work between sessions.  Members include the Metropolitan, who serves as Chair; the Chancellor, the Secretary, and the Treasurer; one priest and one layperson elected by each diocese; and three priests and an equal number of laypersons elected by the All-American Council.