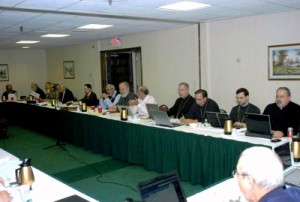 HUNTINGTON, NY [OCA]  Members of the Metropolitan Council of the Orthodox Church in America will gather for their fall session at Immaculate Conception Seminary here September 21-24, 2015.

“As customary, the session will open with a one-day retreat,” said Archpriest Eric G. Tosi, OCA Secretary.  “Dr. Mary Ford, Associate Professor of New Testament and Hermeneutics at Saint Tikhon’s Seminary, will speak on the ‘Proper Interpretation of the Book of Revelation,’ while Archpriest Dr. John Behr, Dean of Saint Vladimir’s Seminary, will deliver a presentation titled ‘Becoming Human.’”

“A substantial portion of the Metropolitan Council meeting will be devoted to strategic planning for the next triennium in order to implement the decisions of the 18th All-American Council, with direction provided by His Beatitude and members of the Holy Synod,” said Father Eric.  “There will be four strategic planning sessions, during which concrete goals, the alignment of resources and implementation will be discussed in order to develop a final plan for ‘moving forward’ will be developed.”

Among the other items on the agenda are a detailed review of the 18th AAC; the selection of missions that will receive Church Planting Grants in 2016; a presentation on a new General Counsel for the OCA and related legal matters; and reports by the Church’s officers, departments and committees.  Also to be considered will be a “roll-out plan” for the new Statute of the Orthodox Church in America as passed by delegates to the 18th AAC.

In addition to reviewing the proposed 2016 budget, Council members will devote an entire session to budgetary matters and the implementation of the new finance plan, as adopted at the 18th AAC.

The Metropolitan Council is the permanent executive body of the Church Administration which exists for the purpose of implementing the decisions of the All-American Council and continuing its work between sessions.  Members include the Metropolitan, who serves as Chair; the Chancellor, the Secretary, and the Treasurer; one priest and one layperson elected by each diocese; and three priests and and an equal number of laypersons elected by the AAC.