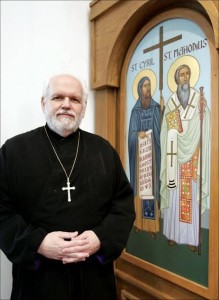 BROADVIEW HEIGHTS, OH [OCA] – One hundred and three clergy and lay delegates representing parishes throughout the Orthodox Church in America’s Diocese of the Midwest gathered at Archangel Michael Church here on Tuesday, October 7, 2014, for a special Assembly at which Archpriest Paul Gassios was nominated to fill the vacant See of Chicago and the Midwest.

Father Paul’s name will be forwarded to the Holy Synod of Bishops for canonical election.

His Grace, Bishop Alexander of Toledo, Locum Tenens, opened the Assembly immediately after the celebration of the Divine Liturgy.

For several months, Father Paul has served as Administrator of the Diocese of the Midwest.

Raised in a Greek Orthodox family, Father Paul became a member of the Orthodox Churh in America in the mid-1980s.  He received a Master of Social Work degree from Wayne State University and was awarded the Master of Divinity degree from Saint Vladimir’s Seminary in 1994.  After his ordination, he served in the Diocese of the Midwest as rector of Saint Thomas the Apostle Church, Kokomo, IN for 11 years and as rector of Archangel Michael Church, St. Louis, MO, for an additional seven months.  In 2007, he was transferred to the OCA’s Bulgarian Diocese and assigned Dean of Saint George Cathedral, Rossford [Toledo], OH.