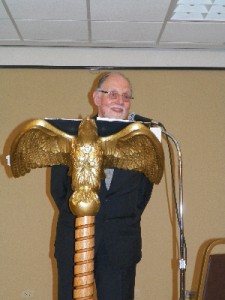 (West Palm Beach, FL)  George Pontikes was elected the thirteenth president of Orthodox Christian Laity (OCL).  The election took place on October 24, 2014.  Mr. Pontikes is a city of Chicago native and an attorney.  He and his wife Harriet reside in Evanston, IL.  They are parents of three accomplished daughters.  Their pride and joy is their granddaughter Zoe Panorea.   George is a founding member of Orthodox Christian Laity.  He is active in the life of his parish community Saints Peter and Paul, Glenview, IL.  He has served the church on the diocese level and has participated in many Clergy Laity Congresses.  His vision for OCL is to stay focused on addressing and informing the community about the need and progress being made to develop a unified, autocephalous missionary Orthodox Christian Church in the United States.  The executive committee, including Vice Presidents Andy Kartalis, OH, Peter J. Petkas, TX, Bill Souvall, UT, Treasurer George Karcazes, IL,  Secretary Roy Snyder, MO and Immediate Past President Susan Haikalis, CA , are delighted with the election of Mr Pontikes and are committed to working with him to promote the mission of OCL. 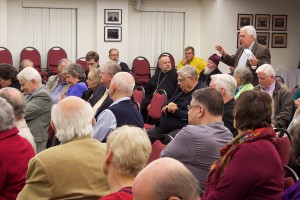 Participants at the Open Forum

Also elected to the Advisory Board was His Grace Bishop Michael of New York and New Jersey.  The Right Reverend Michael Dahulich, Ph.D., has taught New Testament and Ethics.  He has earned degrees from Christ the Saviour Seminary in Johnstown, PA (B.Th. in Theology), St. Vincent College in Latrobe, PA (B.A. in Philosophy), and Duquesne University (M.A. and Ph.D. in Theology). In 1973, Fr. Michael was ordained to the Holy Priesthood by the late Bishop JOHN of the Carpatho-Russian Diocese. He served as Vice-Chancellor of the Diocese and the Secretary to two bishops. He was the Director of Religious Education for the Johnstown Deanery and the Dean of the parishes of the Mid-Atlantic Deanery. He worked as Associate Editor of The Church Messenger and compiled and edited the prayer book Come to Me. He served as a member of the Study and Planning and Ecumenical Commissions of the Standing Conference of Canonical Orthodox Bishops in the Americas.  He began teaching at St. Tikhon’s in 1994; prior to that he was on the faculty at both Christ the Saviour Seminary and Duquesne University. He has delivered numerous guest lectures and led sev­eral spiritual retreats. He has written extensively for The Church Messenger and Alive in Christ and has a recurring column on “Sobornost” in The Orthodox Herald. He is a member of the Orthodox Theological Society of America and rep­resents the OCA at the advisory council meetings of the American Bible Society.

Also elected was Father Timothy B. Cremeens who resides in Dudley , MA and is assistant pastor at St George Antiochian Orthodox Cathedral and is coordinator of Ichabod Washburn Hospice Residence in Worcester, MA. He has an extensive background in teaching Church History and the Bible as adjunct in various higher educational institutions.  He received his PhD in the History of Global Christianity from Regent University, Virginia Beach, VA.  He has presented papers and articles at various conferences and reviewed books.

Also elected to the advisory board in order to facilitate their election to the board of directors were Stacy Sennott, IL, Sonja Anderson, TN and Alin Voicu-Comendant, TX.

Please see the press release prepared by St. Vladimir’s Communication Department to read about the Annual Meeting Program on the Progress of the Assembly of Bishops.