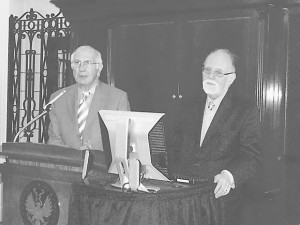 William Souvall, out-going President of OCL, explained, “we have assembled a wide arrange of Orthodox hierarchy, clergy and laity who [examined]the Orthodox Christian experience in America and suggest various visions for the future. OCL strongly believes and has advocated during its 25-year history that an essential part of any future vision must include unification of the Orthodox faithful in our country.”

The broad-based gathering featured venues and speakers representing most of the major Orthodox jurisdictions in the US and Canada and included leading experts on Orthodoxy.

The context of OCL’s recent meetings is the Assembly of Canonical Orthodox Bishops of North and Central America that was established three years ago, which aims at greater Orthodox unity in America and whose Chairman is Archbishop Demetrios of the Greek Orthodox Archdiocese.

It has been a long time coming. George Karcazes, one of the founders and former presidents of OCL, told TNH “I did not expect after 25 years to still be at it,” but he believes that with the Assembly, “now a vehicle exists for progress to be made.”

The conference began with a hierarchical Liturgy at St Nicholas Cathedral, located a few blocks from the St. Sophia Cathedral of the Greek Orthodox Archdiocese, officiated by His Eminence Archbishop Nathaniel, Locum Tenens of the Orthodox Church in America (OCA) assisted by Bishop Mark of Baltimore and area clergy.

An OCL Board Meeting was then convened in the Cathedral Hall. One of the conference highlights was a private tour of the Library of Congress. James H. Billington, The Librarian of Congress, arranged for a special exhibition of consisting of eight tables filled with books and artifacts pertaining the history of the Orthodox presence in America.

A reception in the LOC’s Whittall Pavilion included a DVD showcasing the History of Orthodoxy in America and OCL narrated by its Executive Director, George Matsoukas . OCL Board of Directors members George Karcazes and George Pontikes discussed the founding and purpose of OCL and answered questions.

The DVD noted that OCL was established in 1987 based on four principles: 1) The laity exercise their legitimate responsibilities as part of the conciliar governance process of the church in America 2) Church governance is accountable to all members of the church 3) transparent governance 4) Orthodox unity. A grassroots organization, the 1987 meeting at the home of Jim and Mary Koulogeorge in Northbrook, IL is considered OCL’s first event. Susan W. Haikalis of Walnut Creek, CA was elected the new President of OCL during the 2012 conference.

The DVD summarized the history of the Orthodox presence in America and highlighted start-and-stop process of efforts to promote unity among the 14 Orthodox jurisdictions, including the 1994 meetings spearheaded by then-Archbishop Iakovos at the Antiochian Village in Ligonier, PA.

Ligonier, which inspired hopes – soon to be dashed – that Orthodox unity in America was imminent. The Assembly has restarted the process.

The Assembly replaced the first vehicle for common Orthodox endeavors in America, SCOBA, and recently held its third annual meeting. According to its website “The Assembly has been established in accordance with the Decision of the 4th Pre-Conciliar Pan-Orthodox Conference, convoked in Chambesy, Switzerland, June 6-12, 2009, at which met representatives from all the universally-recognized autocephalous Orthodox churches.” Among its stated goals is; “the promotion and accomplishment of Church unity in North and Central America.” The plan is for it to ultimately be succeeded “by a governing Synod of a united Church in North and Central America.”

The “Pre-Conciliar” reference pertains to the Great and Holy Council of the entire Orthodox church which has been in preparation for more than fifty years. While there is still no sign that it will finally be convened, the matters likely to be on its agenda are pressing for World Orthodoxy and were likely to have been discussed at an “exceptional conference” that took place at the renowned St. Sergius Institute, Paris, on 18-20 October 2012.

After vespers on October 26 at the St George Antiochian Orthodox Church, the keynote address was delivered by His Grace Maxim, Serbian Orthodox Church, who is also a Member of Secretariat of the Assembly. His presentation was titled: “Ecclesiology of community and need for tangible Unity in North America.” Protodeacon Peter Danilchick followed with details about how the Assembly works. Both men were able to report that the bishops were becoming comfortable working together and it was noted that there are three or four plans for administrative structures under discussion.

Souvall noted that “while the deliberations of the group’s three meetings thus far have been important, there has been little or no evidence that unity is being promoted at regional and local levels,” adding, “it is imperative that the Bishops communicate to their respective clergy and communities that there is a process for unity and that everyone in the church should be a participant and a contributor to this historic mission.”

The conference concluded on October 27 with panel discussions on the theme: “Our Orthodox Past, Present and Future.” The past was surveyed by noted Byzantinist John Yiannias, Andrew Walsh of Trinity College, and writer/publisher Nicholas Chapman.

Ponitkes examined the roots of tension between hierarchy and laity and traced it to Ottoman millet system where clergy were granted secular authority. He noted that the reduction of the laity to three functions, “ pay, pray, and obey,” collides with the reality of American parish life organised legally as religious corporations. He urges adoption of a model of “syndiakonia – shared /co-ministry.”

The panel on the future was moderated by Dr. Elizabeth Prodromou of Boston University and former Vice Chair of the US Commission on International Religious Freedom. The panelists included Nicholas Gvosdov, John Sitilides, Michael Tsakalos, and Marilyn Rouvelas. The latter spoke about the need to revive the order of the female diaconate, and about the pursuit of stillness as taught by the Church’s meditative hesychast tradition. Sitilides spotlighted some disturbing demographic trends derived from the statistics of the GOA and studies by the Patriarch Athenagoras Institute. Gvosdov spoke of the need to transcend Orthodoxy’s ethnic divisions.

Regarding the Assembly’s goal of Orthodox unity, Karcazes told TNH, “if more people knew about the issue, they would support it.” He believes that if past experience is a guide, hundreds if not thousands will learn more about the issues through videos of the proceedings which will be posted on the OCL website.