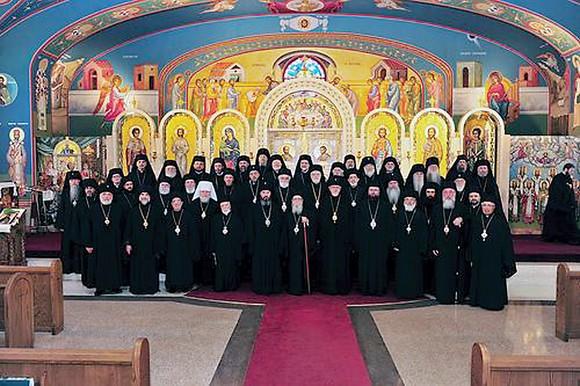 Commemorative photo of the third annual meeting of the Assembly of Bishops in September, 2012. Archbishop Demetrios of America (7th from L) is the Assembly’s Chair.

NEW YORK, NY – Orthodox Christian Laity (OCL), a national organization of Orthodox Christian laypersons that will mark its 25th anniversary at its annual conference this Fall in California, has been at the forefront of critical Church issues through its publications, conferences, and meetings, despite the fact that few know of its existence.

Whether or not people agree with OCL positions – they have met numerous times with hierarchs from of Archdiocese and the Ecumenical Patriarchate, whose officials have alternately viewed them with interest and suspicion – they have a vision for the Church and a strategy on how to achieve their goals.

OCL was incorporated in Chicago by Greek-Americans active as Church and community leaders in order to support greater participation by the laity in the governance of the Greek Orthodox Archdiocese and to promote Orthodox unity in America. Their website, ocl.org, will inform visitors regarding important matters about which there is only limited information.

Few people seem to be aware of it, but OCL is one of the few groups that have embraced it. In 2009, the 4th Pre-Conciliar Pan-Orthodox Conference in Chambesy, Switzerland which was attended by the representatives and leaders of all the universally-recognized autocephalous Orthodox churches in the world led by Ecumenical Patriarch Bartholomew, established the Assembly.

Archbishop Demetrios is its chairman and according to its website, http://www.assemblyofbishops.org, “The Assembly understands itself to be the successor of SCOBA, and as such, it has assumed all of its agencies, dialogues, and other ministries.”

One of its four stated main goals is “the promotion and accomplishment of Church unity in North and Central America.” The existence of multiple jurisdictions along ethnic lines in a given city or region is an anomaly in the Orthodox Church.

Archbishop Nathaniel of the Romanian Orthodox Episcopate of America and is a member of the OCL Advisory Board. The National Herald asked him to put the Assembly into perspective. “The main thing to keep in mind is that the Assembly has been blessed by all the Patriarchates.”

Nevertheless, even as OCL leads the cheers, its leaders notes that not much seems to be happening. OCL’s Executive Director George Matsoukas sees symptoms of lethargy in the Assembly’s website. “It’s is not very informative.” Regarding the Assembly, he says it is moving glacially. He would bristle at those who say that is the Orthodox way, saying rather that “it has lost its focus… What are the Committees doing?”

OCL’s President Susan Haikalis would also like to see more movement, but said that OCL’s November conference provides an opportunity to spotlight the Assembly. 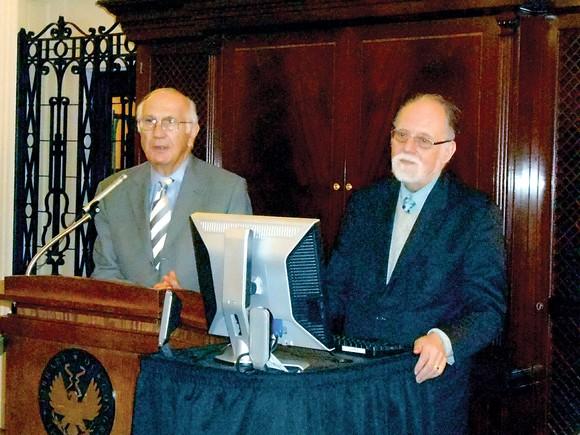 OCL Board members George Karcazes and George Pontikes discussed its founding and purpose and answered questions at the organization’s Washington, DC conference in 2012.

Chicago attorney George Karcazes one of OCL’s founders and Past-President of OCL and the Parish Council of the Saints Peter and Paul Greek Orthodox Church, is a bit more sanguine.

“The fact that they have created committees and work is being done, all preliminary to a proposal…for the restructuring of the Orthodox churches” is very positive. He pointed out, however, that to move forward, clergy have to be told by their hierarchs to devote sermons and parish council meetings about the existence, function and aim of the Assembly.

George Matsoukas is less patient. He believes“OCL has to keep the community informed about the Assembly because nobody knows what is happening.”

It would not be the first time. Karcazes spoke about the Clergy-Laity Congress held in Los Angeles in 2002 as example of the leading role OCL has played on some important issues. Thanks to its efforts, the L.A. Congress was the first time in his experience that “a really significant body of lay people arrived there knowledgeable about the issues being discussed.”

“We fought the battle of the Archdiocesan Charter and that was the high point, in terms of getting the laity involved.” He was referring to revisions in the Archdiocese’s charter which had been in force since 1979. The Ecumenical Patriarchate made revisions, which followed and codified its transformation of America’s bishoprics into metropolises formally under the Archbishop but effectively under the Patriarch and independent of New York.

Peter Marudas, another founder, served as Chief of Staff for retired Senator Paul Sarbanes and is one of many Greek-American community leaders who believe the change was ill-advised. “It undercut the role of the Archbishop and weakened the unity of the community,” he told TNH.

One of the main issues in Los Angeles was the role of the Laity, in particular, the defense of the 1979 charter’s requirement that any changes to the charter had to be approved both by the Patriarch and a Clergy Laity Congress. That was removed from the new Charter, which Karcazes said was to be kept under wraps and not even discussed.

OCL obtained copies and disseminated it to all the parishes and the arriving delegates demanded to be heard. That resulted in an unprecedented item-by-item review of the proposed charter. Finally, Dr. John Collis’ historic motion was overwhelmingly adopted that the suggestions be forwarded to the Patriarchate.

“But when the Patriarchate pretty much ignored all the changes…OCL helped to fund a lawsuit that was filed in New York by about 30 individuals…Ultimately it was dismissed because of the court’s reluctance to get involved” on church-state separation grounds, despite having a strong case Karcazes said.

Regarding reform in the Archdiocese, Karcazes points out that the decline in the Archbishop’s prestige and authority limits his ability to change things, but Marudas is even more pessimistic. “There is a retrogression in the way it is organized.” He said there has been an increase in the number of leaders who are appointed by hierarchs rather than elected by the laity at the Archdiocesan and Metropolis levels.

His main point is that this state of affairs “drains the vitality out of many of the organizations because [member participation]is the way we do things in America.” OCL also sees a lack of transparency and accountability, which it says can be remedied through the principle of syndiakonia, co-ministry of clergy and laity.

TNH brought up the concern expressed by some Greek-Americans that promoting Orthodox Unity will undermine the Hellenic character of their parishes. Marudas said it is a false dichotomy. “There is nothing that says that if you are for Orthodox unity you would be against the promotion of the Hellenic character.”

He noted “These communities are already changing every weekend with mixed marriages. The rate is at least 80 percent. It’s happening anyway and isn’t it better for it to happen in a structure which encourages people to stay within the church…and which enables us to reach out to the greater community and our own young people…it doesn’t rule out having communities with more Greek the liturgy.”

Karcazes believes that even with the canonically correct establishment of one Orthodox hierarch in each city, the latter could still be assisted by bishops corresponding to the traditional ethnic groupings and thus minister to their continuing needs of parishes.

Archbishop Nathaniel, whose main concern is to advance the cause of Orthodox unity, addressed the issue for TNH. “I think OCL has kelp pretty close to the issue at heart, which is how do we live as Orthodox Christians respecting our own ethnic traditions and languages and also become a moving force in American society.

“The church is a mother and has many children. It certainly cannot say you cannot use this language and not have those traditions. Local communities have particular issues, one is the language and passing on with the language cultural and historical benefits,” he said.

He agrees that any structure that emerges would support local parishes determining such issues by themselves, a principle first enunciated by Archbishop Iakovos of blessed memory. Nathaniel said “where we are speaking of when there might be one bishop in an area that bishop must respect the needs of his people. He can’t say we can only use English.”

Karcazes brought up fears expressed by some Greek-Americans that the “poorer” jurisdictions just want access to the Greeks’ money, including the Faith and Leadership 100 endowments, “but there are ways of dealing with that if the will is there,” he said.

Haikalis was buoyed by the recent merger of Antiochian and Greek Orthodox parishes in Tennessee that were both struggling. “That’s the direction we need to be going in, finding ways to bring everyone together. It may be uphill, and not in my lifetime, but maybe in my children’s life times.”

Another situation is typified by her parish of the Ascension Cathedral in Oakland, whose membership already represents a multi-jurisdictional reality. “Despite the existence of other ethnic churches in the Bay Area, people by choice are coming to Ascension.”

James Koutrelakos, psychologist and professor, is the author of a landmark study of over 700 New York high school and college students which shows that “ethnic identity can continue, strong, across generations, if the right factors are in place.” Among Greek-Americans, the factors included church membership, participation in other organizations, and children’s attendance of Greek culture and language schools.

The implication is that with imagination, good management, and a commitment to gathering the necessary financial resources for schools and innovative programs, Hellenic identity can flourish within a Pan-Orthodox framework, but OCL members would say that can only happen if clergy and laity are working together.