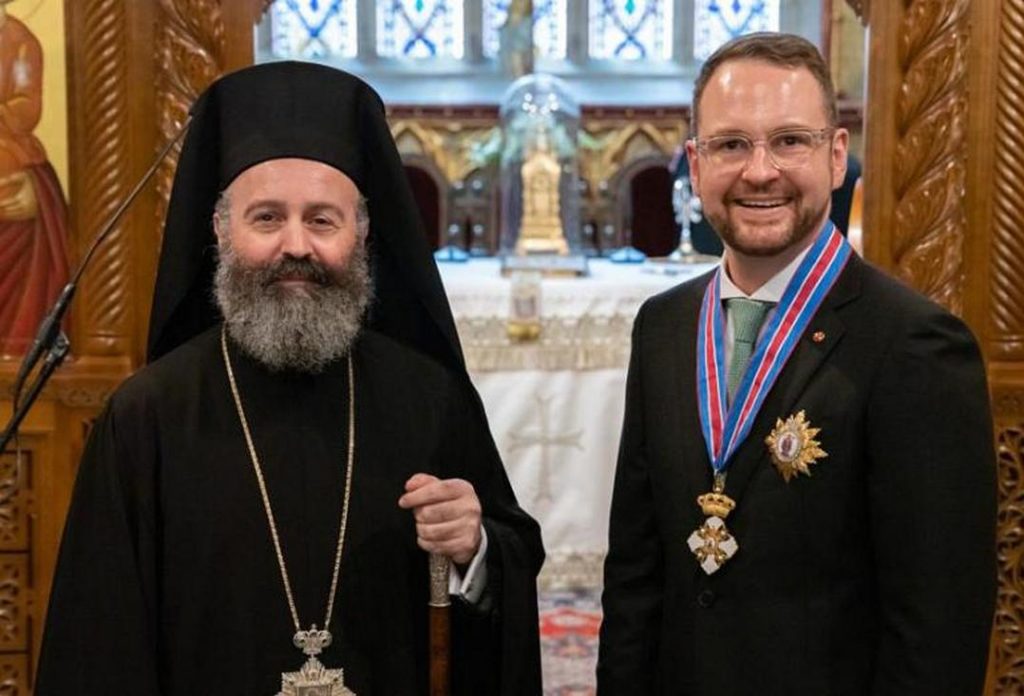 BACK in 2017, ahead of Australia’s plebiscite to legalise gay marriage, the Greek Orthodox Church spent a great deal of time and money opposing same-sex unions.

Then, at the beginning of this year, church members had a WTF? moment when the man who successfully pushed hard for marriage equality – Liberal Party Senator Andrew Bragg – was awarded the highest honour the Greek Orthodox Church in Australia can bestow.

Bragg became the the first non-Greek and non-Orthodox person to receive the Order of Christ-Loving and was proclaimed a Grand Commander by the church’s newly-appointed head, His Eminence Archbishop Makarios.

He also got 24-carat gold medals at a special service at the Cathedral of Annunciation at Redfern in Sydney on 20 January.

This was reportedly a reward for Bragg’s help to fast-track the Archbishop’s permanent residence after the primate had come into Australia on a tourist visa. Normally the process takes ordinary folk years, but Makarios got his residency in a matter of months.

The honour bestowed on Bragg did not sit well with some church members. One critic of the award, Terry Korian, said the award to Bragg was:

An apparent break with Orthodox moral teaching and basic common sense. The Greek Orthodox Archdiocese of Australia, then under the leadership of Archbishop Stylianos, had campaigned publicly and aggressively against this change to the definition of marriage.

How can an Orthodox Bishop award one of the most prominent leaders of the movement to recognise same-sex ‘marriages’ with the ‘Order of the Christ-loving’? When did denying our Lord’s teachings make one a lover of His Person?

The church is now in the midst of a fresh row, this time over the purchase of a $6.5 million luxury apartment for Makarios. It has views of Sydney’s famed harbour and Opera House and an indoor heated swimming pool. (No such luxury for Bragg, whose family home cost a piddling $4,675,000.)

One critic, Laura Nicolelis, said in an email to the The Pappas Post:

The hypocrisy of a man of God basking in the luxury of a $6.5 million apartment with the majority of his flock struggling to make ends meet is blasphemous.

The average Greek Orthodox faithful in Australia are disenchanted and feel disconnected to this man and his decisions continue to turn off so many rank and file Orthodox Christian faithful.

According to this report, claims that the late Archbishop Stylianos, above, approved of the property purchase were vehemently denied by his nephew, lawyer Nikolaos Kalliouras. He told the Greek newspaper Neos Kosmos:

It goes without saying that Archbishop Stylianos, judging from his personal path in life, would never use an apartment that was similar to the one purchased by the Consolidated Trust of the Holy Archdiocese of Australia nine months after his death, as his personal residence, the luxury of which he could not even imagine.