[ditty_news_ticker id="27897"] OFFICIAL LUNCHEON HOSTED IN HONOR OF HIS ALL-HOLINESS AND OF THEIR BEATITUDES THE PRIMATES OF THE LOCAL ORTHODOX AUTOCEPHALOUS CHURCHES, BY THE PRESIDENT OF THE HELLENIC REPUBLIC - Orthodox Christian Laity 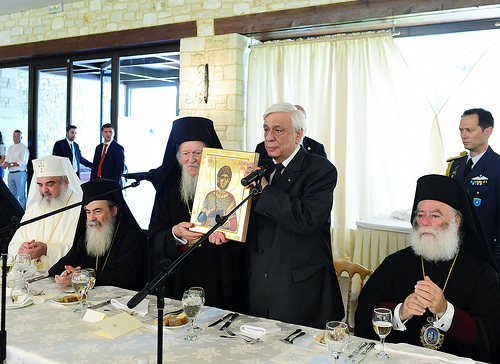 The President of the Greek Republic, Mr. Prokopis Pavlopoulos, hosts a luncheon in honor of the Primates of the Autocephalous Orthodox Churches in Heraklion, Crete.

Source: Press Office of the Holy and Great Council

His All-Holiness Ecumenical Patriarch Bartholomew offered a toast on behalf of the Primates of the Local Orthodox Autocephalous Churches, at a luncheon hosted in their honor by the President of the Hellenic Republic, Mr. Prokopios Pavlopoulos.  His All-Holiness thanked the beloved Greek people for their prayerful presence and support of the work of the Holy and Great Council, promising that Orthodoxy shall fulfill her historic duty and responsibility.

His All-Holiness added that “Orthodoxy constitutes a real and permanent place of peaceful coexistence and stability in the modern – torn – world, a true source of peace for all the peoples.  The word of the Orthodox Church is essential, because it proclaims the necessity of charity, love, and unity of mankind, as well as, the necessity of peaceful cooperation between the peoples of the earth, regardless of the religious faith of each.”

His All-Holiness also noted that, as the First Ecumenical Council held in Nicaea in 325 AD began on June 19, so the Divine Providence has allowed for the Holy and Great Council of 2016 AD to, likewise, commence on June 19, with the Patriarchal Divine Liturgy of Pentecost – calling all in unity.

The President of the Hellenic Republic, Mr. Prokopis Pavlopoulos, welcomed the convening of the Holy and Great Council in Crete, making a reference to the First Ecumenical Council, and the value of the Synodical System, “as the irreplaceable guarantee of the unity of the Orthodox Church.”  The President also said that the mission of the Holy and Great Council acquires universal dimensions, “since Christianity, with Orthodoxy as its epicenter, is called to defend besides everything else, the principles and values of European culture and western civilization in general, with emphasis on those of peace, democracy, freedom and justice.”