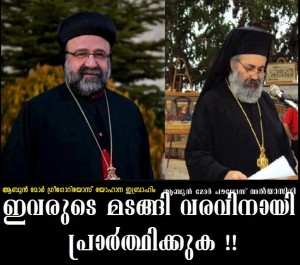 On Monday, April 22, 2013, which has become known to everyone, His Eminence Archbishop Mar Gregorios Yohanna Ibrahim of the Syrian Orthodox and Boulous Yazigi of the Greek Orthodox church were kidnapped at the hands of an unknown group near the Turkish-Syrian border between Aleppo and Antioch.

The two sister churches have publicly and in private and continue today to exert every effort at local, regional and global levels. These efforts concentrated on all types of communication with honorable ministers, members of parliament, ambassadors, their holiness patriarchs and their graces archbishops and bishops and extending the communication channels to include the United Nationsand many other stakeholders and friends, as the two churches pursued every opportunity that was proposed by the loving friends and left no stone unturned to secure their release which to date has not eventuated.

We note with utmost surprise how small and big states have shown their ignorance when it came to this serious and dangerous event.
Today, on the occasion of the centenary day of this inhumane absence and unethical handling of two Archbishops that represent the love of God and serve the people of every religion and national affiliation, especially humanitarian organizations working in the service of human beings.

The kidnappers have not indicated the whereabouts of the two Archbishops and have not announced their identity and what are their demands or the purpose behind their inhuman act.

The two Archbishops are in captivity and their will is being suppressed and suffer from medical conditions that need to be addressed due to their age.

We, as a committee of the Patriarchate representthe Syrian Orthodox Church in line with the order and guidance of His Holiness Mar Ignatius Zakka I Iwas, who entrusted to us the task of following up the case of the two kidnaped Archbishops in constant coordination with the Patriarchate of the Greek Orthodox Church. We appeal to the international community on various levels and in every place to work with us to facilitate the work of our committee and the friends of the two Archbishop who seek to spread peace and tranquility all over the world, and emphasize that any service provided to this committee is a service to God and humanity, remembering the words of our Lord and Savior Jesus Christ: Blessed are the peacemakers, for they shall be called sons of God. (Mathew 5:9)

This is an appeal from the hearts of friends and family and all people of pure conscience and people of goodwill thanking in advance all those who cooperated and sought to help materialize the will of God in this world providing freedom to the kidnapped Archbishops and all other hostages, so they may return to their churches and their people and to the civil society to which we all belong.