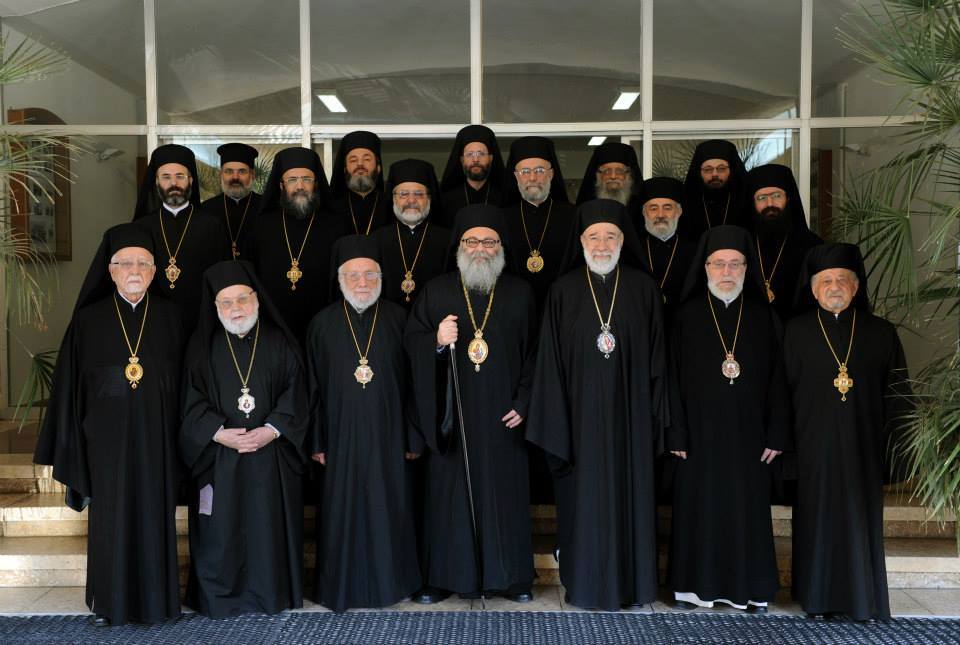 Holy Synod of Bishops of the Church of Antioch

Statement by the Secretariat of Holy Synod of Antioch
Balamand, October 17, 2013

Their Eminences Metropolitans: Philip of New York and North America; Paul of Australia and New Zealand; and Constantine of Baghdad and Kuwait and their dependencies gave their regrets for not being able to attend. Metropolitan Boulos (Yazigi) of Aleppo and Alexandretta and their dependencies was present in the prayers and invocations of the Synod Fathers, despite his absence caused by his captivity.

After prayer and calling upon the grace of the Holy Spirit, His Beatitude opened the meeting by hoping that the Lord God may shower His blessings upon all the participants, so that they may rightly divide the Word of God’s Truth to the believers and to all those who are thirsting for hope.

His Beatitude gave an account about the Pastoral Visits that he made to the Archdioceses of Lattakia, and to the city of Tartous in the Archdiocese of Akkar, and to the German section in the Archdiocese of Europe. He had the opportunity to meet the faithful, their pastors, and the various archdiocesan committees. His Beatitude expressed the joy which he felt upon seeing the believers abiding on the rock of faith, and living in the love of the Church and Her Master. His Beatitude thanked the Archbishops of these archdioceses for their wise and loving care towards their parishioners. He emphasized the importance of giving continuous care to our good people, through love, thoughtfulness, and vision for their growth in Christ, and steadfastness in their Church and land, and their continuous witness to Jesus Christ wherever they reside.

Also, His Beatitude briefed the members of the Holy Synod about his recent visit to the Hashemite Kingdom of Jordan to participate in the conference on “The Challenges facing the Arab Christians,” and to meet His Majesty Abdullah II, the King of Jordan. In his meetings, His Beatitude expressed the position of the Church of Antioch concerning the events that are taking place in the region, stressing the need to work for peace, freedom and human dignity of the Arab people, and indicating how Christians are well rooted in their homelands, their commitment to their countries’ causes, and how they have interacted with their Muslim brothers throughout history.

Also, His Beatitude briefed the Synod members on his visit to the Vatican, where he met His Holiness Pope Francis I, and participated in the conference organized by St. Egidio Community about “Courage and Hope, Religions and Cultures in Dialogue,” where the position of Antioch regarding the issues raised was clearly presented, particularly the suffering of the Syrian people and the role of the Christian witness in the Middle East. The visit was an opportunity to review the prospects for cooperation between the Catholic and Orthodox Churches, in order to make more effective the witness of Christians in the Middle East and in the world today, for the dignity and nobility of human beings, and to consolidate the values of freedom, justice and peace in the world.

The Synod Fathers reviewed as well the reports submitted by the delegations that participated in the one thousand and twenty fifth anniversary of the Baptism of Russia and the one thousand and seven hundred commemoration of the Decree of Milan. The Fathers congratulated the Russian and Serbian Churches, lifting up the prayers to God to send them His many graces and embrace their parishioners with His Light, Peace and Love.

The Fathers discussed the crisis caused by the election of the Church of Jerusalem an Archbishop on Qatar. They sadly contemplated the persistence of the Patriarchate of Jerusalem’s violation, in spite of all the initiatives and mediations conducted by the Ecumenical Patriarchate and the Government of the Hellenic Republic in order to resolve this crisis in accordance with the ecclesiastical laws and in a peaceful spirit. The Synod Fathers reiterated their desire to give priority to the peaceful solution over other solutions. However, they stressed the need to find a solution to this crisis in no later than two months from today’s date. They delegated His Beatitude, in the event of lack of response from the Church of Jerusalem to the rightful demand of the Church of Antioch to remove the aforementioned violation on its canonical territory, to take all necessary measures including severing of communion with the Patriarchate of Jerusalem. The Synod also decided to suspend the Church of Antioch’s participation in all the Assemblies of Canonical Orthodox Bishops abroad (in the Diaspora) until the removal of the violation of the Patriarchate of Jerusalem.

The Synod Fathers listened to a report about the St John of Damascus Institute of Theology presented by Deacon Porphyrios Georgi, the Institute of Theology Dean. Deacon Porphyrios gave a presentation about the current progress of the Institute, its vision and mission. The Fathers thanked the Dean for his presentation and blessed his efforts, giving him their proposals for further growth.

The Synod Fathers looked into the suffering of Syria and its people because of the violence plaguing the homeland, destroying the country and causing the killing and displacement of its people. They stressed that the language of violence and murder is a language alien to the traditions of the Syrian people who aspire to live in freedom and dignity in their own land, under one state, in which everyone is involved in upholding and in consolidating the values of democracy, freedom, justice and coexistence based on respect for others regardless of differences, and the need to follow the logic dialogue and a peaceful solution to overcome all the crises.

The Synod Fathers appealed to their parishioners to abide in the hope “that does not fail,” and by the evangelistic values, which calls on them to renounce violence and respect the image of God in every person, wipe away the tears from the face of all the sufferers in the earth, and remain in their own lands, and not give it up in whatever hard circumstances they encounter, because the Lord wants them as witnesses in their homelands. They implored them not to give away their land to solve the current material problems, because this land is mixed with the soil of saints. This land will remain throughout time their only refuge. They encouraged them to intensify their prayers for peace in Syria and in the whole world, and the collaboration among them to mitigate the impact of the crisis, especially on the most needy among them. In this area, the Synod Fathers send their gratitude to the churches and organizations, associations and individuals for their cooperation with the Patriarchate for the relief of the needy brothers. Also the Fathers thanked their parishioners who responded to the call of the Patriarchate and gave generously to support the relief work in the Patriarchate, through their bids on the occasion of the Day of Solidarity of Antioch in order to support the relief work set by the Holy Synod on September 15, 2013. The Fathers remembered their parishioners in the city of Aleppo, which misses its Metropolitans, and asked them to remain firm in the hope, because the ashes of various trials will not conceal the face of the ever Beloved One.

The Fathers addressed the international community, hoping they turn to the pain of the Syrian people and agonies , and take off the fueling of war, and contribute to consolidating the values of peace, justice, and democracy, and invest in spending on rebuilding what was destroyed and develop the potential of the Syrian people, rather than invest in iron and fire. The Synod Fathers urged the international organizations and non-governmental organizations, and all bodies concerned about the displaced, to secure the essential necessities of life for those on the doors of winter, so that they may spend their time and live in dignity while awaiting their return to their towns and villages.

The Synod Fathers reiterated their condemnation of the terrorist operations that affect the peaceful citizens and destruction which does not exclude places of worship, in addition to historical and cultural monuments witnessing to the nobility of the Syrian civilization. They sadly pointed the vagueness of the issue of the kidnapped bishops, Paul Yazigi and John Ibrahim. They called on the Arab and international communities to assume their responsibilities in this regard to establish the truth and to uncover the fate of both bishops and all kidnapped people and their safe return to their families and loved ones. The Synod Fathers prayed for the divine mercy on the souls of the innocent martyrs who died during this devastating war, especially the priests who died while soothing the wounds of their parishioners.

The Synod Fathers turned to Lebanon, and its citizens who are suffering from a severe economic crisis and a deep concern over their fate as a result of the persistent state of the disabling of Lebanese governmental institutions. They appealed to all parties and officials carry out their responsibilities in order to save Lebanon and the advance of its citizen. They encouraged them to maintain the values of democracy, freedom, and the devolution of power that has long characterized Lebanon, and calling them to fortify Lebanon and spare it the risks encompassing it from every direction, through getting over their narrow interests and overcoming their current differences and return to dialogue in a spirit of openness and reconciliation, and national and historic responsibility, through forming a national unity government that is able to ward off risks and maintain stability in order to avoid falling into the vacuum, in preservation of civil peace.

The Synod Fathers discussed state of national activities undertaken by their parishioners in Lebanon, stressing respect for their political diversity and reminding at the same time that the Church, although does not dictate to her parishioners uniformed political positions, but She remains, through the Holy Synod and its head, the Patriarch, the official reference that expresses the position of the Orthodox Church in all that would clarify, in the light of the Gospel, the way for Her parishioners in their commitment to the affairs of their homelands .

The suffering Iraq has not gone unnoticed to the concerns of the Holy Synod Fathers, as well as the wounded Palestine. Let us pray that the Lord God confirm Iraq and Palestine and all the Arab countries on the road to stability and peace. They stressed the need to find a just and comprehensive solution to the legitimate Palestinian issue.

The Synod Fathers asked their parishioners to face the challenges posed by their societies and our contemporary age, in order to test it on the light of the values of the Gospel. They also asked them to work for political, social and economic peace, wherever they are, and to renounce sectarianism and abhorrent racism in all its forms, and to coexist in a sincere way with their co-citizens, and to work for human dignity and freedom, and to stop the bloodshed and commitment to the affairs of the suffering on earth, whom Christ united Himself with.

The Synod Fathers concluded their session by reminding their parishioners about the words of St. Paul to the Corinthians: “Put things in order, listen to my appeal, agree with one another, live in peace; and the God of love and peace will be with you” ( 2 Corinthians 13:11 ).