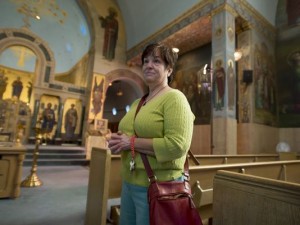 In the ’80s, Janet Damian was drawn to Ss. Peter and Paul Orthodox Cathedral on Gilbert Street because services were said in English instead of the customary mother tongue of her Romanian Orthodox church. When her grandmother objected, she reasoned: “The scriptures never said you must worship in a foreign language.”

Now, 30 years later, the short-in-stature, but tell-it-like-it-is powerhouse is heaven-bent on making her church, the oldest orthodox church in Detroit, relevant again because of what the scriptures do say. Specifically: “… as ye have done unto one of the least of these my brethren, ye have done unto me.”

“And that’s what we’re trying to do here, serve the least of our brethen, ” Damian said on a recent tour of the church’s campus near Michigan and Livernois.

Considering that the parish, first founded in 1907 by Slavic immigrants, was once 300 members strong and now has dwindled to less than 40 parishioners, the odds are not exactly in her favor. Without a full-time pastor since 2009, visiting priests say the liturgy on Sunday. The median age of parishioners is 85 years old — two members are older than 100, a handful are in their 90s. Those who are employed total a paltry four. Not exactly the kind of tithing that would allow for repairing the leaky roof or the peeling paint in the cathedral, which, despite the wear and tear, is breathtakingly beautiful with its Byzantine architecture, spectacular chandeliers and life-size iconic paintings and mosaics.

Plus, the community is fraught with the same woes that led to downtown’s demise. Characteristically blunt, Damian and her small group of revival volunteers have no illusions of grandeur.

“The Michigan/Martin neighborhood may be in southwest Detroit, but we are not in the cool section,” Damian said. “We have a lot of blight, a lot of arson and a lot break-ins. I’m the first to admit that a lot of us commute here from the ‘burbs.”

Still, they are determined not to let vandals and the demoralization that comes with decay win. At 60, newly retired after four decades of “cubicle work” in area hospitals in the clerical field, Damian decided to make the church’s comeback “my baby.” She went to the church board and told them: “We have to stop being immobilized by fear. Detroit is coming back, and we need to be a part of it.”

With church leadership’s blessing, Damian and her band of volunteers brought new meaning to the term outreach ministry.

In 2010, the parish reopened the church community center across the street for “life events” for the Hispanic community: baptisms, weddings and quinceaneras. The once-abandoned church school is now a bilingual early childhood education program called Vistas Nuevas Head Start. In 2011, the church formed a partnership with the nonprofit Focus Motor City (formerly Orthodox Detroit Outreach), and they now serve a hot meal to the poor every Sunday afternoon. Last year, Detroit’s Kitchen Connect began leasing the community center’s commercial kitchen, which sat dormant for decades. Eight food entrepreneurs now create their culinary wonders there, five days a week, 24 hours a day. The once overgrown empty lot by the alley is now a community garden.

“We partnered with them right away because there is a lot of need here, and the whole purpose of our organization is to serve that need,” explained Matt McCroskery, director of Focus Motor City. “So the reason for keeping this place open is not due to some sense of nostalgia or because it’s the oldest orthodox parish the city. It needs to stay open because of the potential for good that can take place in this community. Already, we’ve seen lives changed in spectacular ways.”

“Our chefs love cooking here,” Grose said.”This place is such a hidden gem and we feel like we’re playing a part in helping to bring back the neighborhood.”

The community has responded in kind, Damian said. Ever since refurbishing efforts started in earnest — most agree that would be November 2011 when they had their first Thanksgiving luncheon for the Head Start families — the graffiti started to disappear and blighted buildings have come down. A grant from Eastern Market Corp. paid for a secure new door and alarm system. And while it helps to be on a first-name basis with Rico Razo, their neighbhorhood district leader, the power of the human spirits serving the least of his brethren is very much evident here.

Out in the garden, Damian breaks from its stalk an enormous butternut squash, holding it up with both hands like a prized trophy.

“How ’bout this for a photo of renewal?” she said to a photographer. Her smile could not be more heartfelt. “This really is my greatest joy.”