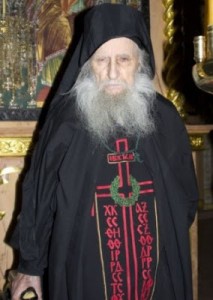 With regard to what is happening within the Roman Catholic Church, if (as you say) “they are opening new horizons in relations between Catholics and Orthodox,” this is something about which I cannot speak with any certainty. What I can say is that if the Roman Catholics decisively set aside the dogmas of the primacy and infallibility of the Pope, this would be an important step towards unity.

You inquire if I see any actual possibility of curing the so-called Schism between East and West. My answer is that I do not see this in the immediate future. Such a “cure”, in order to be realized, must presuppose the rejection of the dogmas that I mentioned, and of other innovations of the Catholics — dogmatic, liturgical, mysteriological [sacramental], etc. Until now, there are no indications that Roman Catholicism is disposed to doing this.

Finally, you ask if I see any way through which the Schism can be cured, “without one side surrendering to the other.” If by the word “surrender” you mean such a rejection, then it is obvious that I see no other way by which it is possible to cure the Schism, save by one side “surrendering,” as you say, to the other. But we must explain here, what we mean by the word “side”. I, of course, do not take it to mean the Oecumenical Patriarch, who is wrongly considered the “Pope of the East” by many Westerners and some would-be Orthodox, and, indeed, by Athenagoras I himself. The head of the Church for any true Orthodox Christian is neither the Pope nor the Oecumenical Patriarch, but Christ Himself. Consequently, the “surrender” in question would entail a yielding to Christ Himself, Who is “the Way, the Truth, and the Life!”

In closing, I must note my conviction that if the Roman Catholics indeed wish to understand the Orthodox Faith, they must abandon their “dialogues” and “symposiums”, which are in vogue today, with the would-be Orthodox and seek this understanding — as you seek it — in the writings of the Great Fathers of the Eastern Orthodox Church and modern “conservative” theologians. (“A Letter to a Roman Catholic”. Orthodox Tradition Vol. XXXI, 3, 2014)