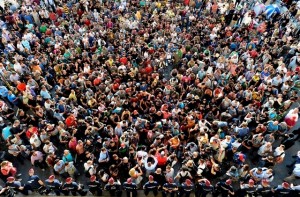 This article was written for RaymondIbrahim.com by Ralph Sidway, an Orthodox Christian researcher and writer, and author of Facing Islam: What the Ancient Church has to say about the Religion of Muhammad. He operates the Facing Islam blog.

The Bulgarian Orthodox Church has announced it will help migrants who have arrived in Bulgaria, but has urged authorities not to let any more migrants in, clarifying sharp differences between Eastern European Christian nations and Western secular/post-Christian responses to the mass Muslim refugee crisis.

It is very interesting that most Orthodox and Eastern Christian bishops have shown great restraint in responding to the Muslim migrant crisis overwhelming Europe. One exception was Coptic Bishop Angaelos of the UK, who promptly rejected Hungarian Prime Minister Viktor Orban’s position of allowing only Christian migrants, saying, “As a Christian I could never justify a policy which only supported ‘our own’… The distinction should be based on people’s need, not their religion.”

To the credit of Christians everywhere, it is primarily the post-Christian West which is stepping up to the humanitarian tragedy of millions of refugees fleeing the Islamic State and the unrest of the Middle East and Africa.

Britain and France have made commitments to take in 20,000 and 24,000 Syrian migrants respectively, whereas Germany has  accepted over 100,000 in August alone, and if current numbers continue, will have absorbed 800,000 by year’s end. (In contrast to the European welcome wagon, most Muslim nations are accepting no refugees: zero, citing concerns over the terrorist threat.)

To be sure, the Western European sentiment is admirable, and seems the ideal Christian response. Yet even Jesus Christ cautioned his disciples to be “wise as serpents and innocent as doves.” Note, Jesus does not urge them to be “vicious,” “aggressive,” or “poisonous” — other adjectives applicable to certain serpents — merely wise. Serpents protect themselves when they have to, slithering away into holes in the earth, hiding from danger, protecting themselves and their brood. There are times when self-preservation is appropriate, even for the followers of Him who voluntarily went to the Cross for all mankind.

Other observers of Europe’s mass migrant crisis are starting to consider what such “serpent wisdom” might involve, even if they don’t reference Jesus’ specific words.

Rod Dreher (who has seemed lately to have become somewhat muddled on the jihad threat) even considered how wide open Christian Europe should throw its borders to an alien people, asking the question, “Is Christianity A Suicide Cult?” Dreher has been reading, as have other commentators, Raspail’s novel, The Camp of the Saints, and offers an excerpt and some thoughts:

Raspail, it seems to me, is deadly accurate in his diagnosis of the sentimental humanitarianism of the Europeans, and how their loss of faith in their own civilization compels them to behave in ways that guarantee its destruction by an invading force. The novel also implicitly raises a disturbing question: What cruelties, if any, are justified for the sake of a nation’s defense?

These are extremely complex, morally harrowing questions, and we are seeing them on display now as Europe faces its refugee crisis.

Dreher also refers to an important article by British Christian Alistair Roberts, whose message essentially distills to this: “…As Christians, we certainly have an obligation to show charity to refugees, but that does not mean that we are morally obligated to allow them to settle among us.”

This seems like the prudent course, serpent wisdom combined with Christian innocence. It doesn’t take an especially wise person — just an honest one — to see the existential threat in all the videos and reports of huge mobs of Muslim migrants screaming “Allahu Akbar” and attacking trains and police in Hungary (and Slovenia), prompting a State of Emergency complete with deployment of tear gas and water cannons.

Then there is the explicit threat from the Islamic State, which promised back in February 2015 toflood Europe with refugees, and now claims to have smuggled thousands of jihadis into Europe. This seems plausible even by the UN’s own statistics, which concludes that far from being primarily composed of families fleeing the unrest of the Middle East, 75% of the refugees are young, fit males. As Mark Steyn notes, “That’s not the demographic distribution of fleeing refugees, but of an invading army.”

Or, as Robert Spencer shows, of an Islamic Hijrah, a deliberate migration, in imitation of Muhammad, with the purpose of colonizing Europe.

Revered Nobel Laureate and Solidarity leader Lech Walesa offered this ominous warning, “If Europe Opens Its Gates to Muslims There Will be Beheadings Here.”

On the same day [as the Muslim migrant attacks on Hungarian trains], September 7, a Roman Catholic bishop of Hungary spoke out:

Pope Francis’s message Sunday couldn’t have been clearer: With hundreds of thousands of refugees flowing into Europe, Catholics across the continent had a moral duty to help by opening their churches, monasteries and homes as sanctuaries.

On Monday, the church’s spiritual leader for southern Hungary — scene of some of the heaviest migrant flows anywhere in Europe — had a message just as clear: His Holiness is wrong.

“They’re not refugees. This is an invasion,” said Bishop Laszlo Kiss-Rigo, whose dominion stretches across the southern reaches of this predominantly Catholic nation. “They come here with cries of ‘Allahu Akbar.’ They want to take over.”

Raymond Ibrahim provides a powerful historical analysis in defense of the position shared by Bishop Laszlo and Hungarian PM Orban, citing examples ranging from Eastern European nations tyrannized by the Ottoman Muslims for hundreds of years, to Myanmar, where,

popular Buddhist leader Ashin Wirathu… staunchly opposes Muslim presence [warning]: “You can be full of kindness and love, but you cannot sleep next to a mad dog”… Wiranthu’s pamphlets say “Myanmar is currently facing a most dangerous and fearful poison that is severe enough to eradicate all civilization.”

Perhaps most telling is the story — unknown by most — behind how Indonesia became the world’s most populous Muslim country. Ibrahim cites Orthodox Christian priest Daniel Byantoro, a native Indonesian convert from Islam and founder of the Indonesian Orthodox Mission:

For thousands of years my country (Indonesia) was a Hindu Buddhist kingdom.  The last Hindu king was kind enough to give a tax exempt property for the first Muslim missionary to live and to preach his religion. Slowly the followers of the new religion were growing, and after they became so strong the kingdom was attacked, those who refused to become Muslims had to flee for their life… Slowly from the Hindu Buddhist Kingdom, Indonesia became the largest Islamic country in the world. If there is any lesson to be learnt by Americans at all, the history of my country is worth pondering upon. (Facing Islam, endorsement section).

Raymond Ibrahim notes the inconvenient truth which prompts all those with deep historical experience of Islam to warn of and resist the mass Muslim influx: “Islam’s unwavering Rule of Numbers: whenever and wherever Muslims grow in numbers, the same ‘anti-infidel’ violence endemic to Muslim-majority nations grows with them.”

Which brings us to Bulgaria. After watching the crisis unfold over these past several weeks, the Synod of Bishops of the Bulgarian Orthodox Church has expressed itself in a clear and admirable manner, extolling the innocence of accepting true refugees, but with the wisdom urged by Christ, warning that they have reached their limit, no more refugees should be allowed:

It is not right for the Orthodox Bulgarian people to pay the price of us disappearing as a State.

It is time for Christians to apply some “serpent wisdom,” and “let our ‘no’ be ‘no’.” The following report on the Bulgarian Orthodox Church offers an example of the way forward.

The Bulgarian Orthodox Church has announced it will help migrants who have arrived in Bulgaria, but has urged authorities not to let any more migrants in. 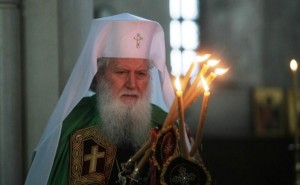 “We consider that our government should in no way allow more refugees into our country. For those who are already here, it is right for us, as Orthodox Christians and as a society, to look after as much as we can and as much as our scant resources allow us, but not any further,” the Holy Synod – the church’s top executive body – has explained in a statement.

The text also reads that the problem should be solved by “who created it; it is not right for the Orthodox Bulgarian people to pay the price of us disappearing as a State”.

“There should be no doubt whatsoever that the Orthodox Church feels compassion and calls for solidarity with all these people who already among us and really, and not supposedly, need care and material support in accordance with our capabilities… The Church always explores the reasons for misfortune and calls for the removal of the reasons. The fight against consequences, if reasons are not removed, is a foredoomed one.”

Fending off accusations of a “delayed” reaction to the migrant crisis, the Holy Synod has reminded that, “in the millennia-long experience of the Orthodox Church no hasty decision-making is envisaged in transitory situations.”

Apart from issues of migrants’ material needs and of solidarity with people coming into the country, the influx “poses questions about the stability and existence of the Bulgarian state, in principle.”

“Also, [it poses]the question what spiritual context, what spiritual environment will the Orthodox Bulgarian people live in if this influx continues to the extent that it shifts the existing ethnic balance in the territory of our Fatherland Bulgaria that God determined for our Orthodox people to inhabit,” the statement goes on.

The Synod has also advised the government to urge an “end to wars” in the Middle East and North Africa in its dialogue with “all international organizations” and also to table the question of “inter-religious tolerance” in countries such as Egypt, Syria and Iraq.

“We consider that the Bulgarian government should concentrate its foreign policy resources… on an end to wars, and not only on should solidarity with the consequences of their endless continuation.”

Presided by the Patriarch (currently Neofit I), the Holy Synod is the governing body of the Bulgarian Orthodox Church, in a country where Orthodox Christianity is the religion of the majority.

Raymond Ibrahim is a Middle East and Islam specialist and author of Crucified Again: Exposing Islam’s New War on Christians (2013) and The Al Qaeda Reader (2007). His writings have appeared in a variety of media, including the Los Angeles Times, Washington Times, Jane’s Islamic Affairs Analyst, Middle East Quarterly, World Almanac of Islamism, and Chronicle of Higher Education; he has appeared on MSNBC, Fox News, C-SPAN, PBS, Reuters, Al-Jazeera, NPR, Blaze TV, and CBN. Ibrahim regularly speaks publicly, briefs governmental agencies, provides expert testimony for Islam-related lawsuits, and testifies before Congress. He is a Shillman Fellow, David Horowitz Freedom Center; a CBN News contributor; a Media Fellow, Hoover Institution (2013); and a Judith Friedman Rosen Writing Fellow, Middle East Forum . Ibrahim’s dual-background — born and raised in the U.S. by Coptic Egyptian parents born and raised in the Middle East — has provided him with unique advantages, from equal fluency in English and Arabic, to an equal understanding of the Western and Middle Eastern mindsets, positioning him to explain the latter to the former.