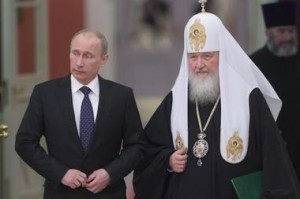 President Vladimir Putin and Patriarch of Moscow and All Russia Kirill arrive for a meeting of Russian Orthodox church bishops in Moscow Feb. 1. – Reuters

By the Monitor’s Editorial Board

As violence escalates in Ukraine, the head of the Russian Orthodox Church appears to distance himself from President Putin, calling for healing and reconciliation. Churches that align with the state often learn the hard way that Caesar has his own kingdom.

The struggle over Ukraine’s future took a worrisome turn Friday when more than 40 people died in political unrest between demonstrators in the port city of Odessa. The tragedy is seen by some as the start of further large-scale violence.

But there is an alternative path that can reconcile the divided Ukrainian people.

Since the crisis began last November, President Vladimir Putin has justified meddling in Ukraine in part because the country is home to Christianity coming to Russia more than a thousand years ago. That history unites Russians and Ukrainians in “culture, civilization and human values,” he stated in a March 18 speech announcing Russia’s annexation of Ukraine’s Crimean Peninsula.

Yet the more that Mr. Putin relies on violence – or at least the threat of it – in Ukraine, the more the Russian Orthodox Church seems to distance itself from his regime.

Last week, the head of the church, Patriarch Kirill, told clerics that the church must “safeguard its peace-making capacity” in Ukraine. “Our Church is not succumbing to any political temptations and refuses to serve for any political positions,” he said.

Ukraine is home to three different Orthodox churches, with the Moscow Patriarchate dominating the eastern part of the country.

After the mass violence in Odessa last week, Kirill insisted that Ukrainians resolve their differences by dialogue and not by weapons.  “Ukraine can heal itself and embark on a path of building a decent life for its citizens only as a common home for people with different political convictions,” he said.

In 2009, after Kirill became head of Russia’s dominant church, he appeared to draw close to Putin. His own view of uniting all Russian speakers under the Moscow Patriarchate overlapped with Putin’s geopolitical vision of extending “Russian civilization” into many former Soviet states.

But as any organized religion eventually learns, aligning itself with the power of the state can come at a high price – especially when the state too easily resorts to violence to resolve political disputes.

In addition, the Russian Orthodox Church could end up losing all its influence in Ukraine if the country adopts either a neutral or anti-Moscow position after elections slated for May 25. And the role of the Moscow Patriarchate among Orthodox churches worldwide could also be diminished.
One possible sign of Kirill distancing himself from the Kremlin was his absence at the March 18 speech by Putin. Other clerics, notably Muslim ones, were in attendance.

Last month, Kirill said that the Russian Orthodox Church “cannot have political enemies.” He urged that “peace return to Ukrainian soil, that people find reconciliation, that law and order be restored, human rights guaranteed and human dignity not trampled underfoot.”

This is not the language that Putin uses for events in Ukraine. But they express the best alternative for the country to decide its future.

Churches must always remain above a conflict, bringing healing rather than reasons for conflict. In Ukraine, that choice becomes more clear by the day.