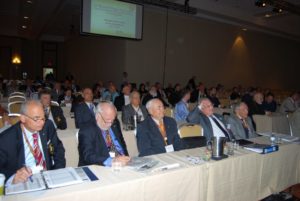 BOSTON, MA – There is only one essential change in the program of the upcoming 44th Biennial Clergy-Laity Congress of the Greek Orthodox Archdiocese of America, to be held at Copley Marriott in Boston, MA, July 1-5.

On July 2, after Archbishop Demetrios’ keynote address, the theme being “All Things Are Possible to the One Who Believes in Christ” (Mark 9:23), the delegates will not form the usual small groups to discuss and analyze the archbishop’s speech, as is usually the case.

Instead, there will be a three-hour open forum (2-5PM) to discuss the Archdiocese’s dire financial situation. As The National Herald revealed almost a year ago, the Archdiocese is virtually bankrupt. Among other things, it is forced to mortgage its Manhattan office building in order to obtain a $7 million loan just to pay its debts, and lack of funds have halted construction of the St. Nicholas National Shrine. These issues have caused embarrassment and ridicule to the Archdiocese, the Greek-American community, and the Ecumenical Patriarchate, of which the Archdiocese is an Ecclesiastical Eparchy.

Audits by accounting firms continue, as do cost-cutting measures.

Meanwhile, the New York State Attorney General has expressed interest in investigating the finances of the Archdiocese and the funds for the Shrine.

It should be noted that the Boston Metropolis, which is hosting the 44th Clergy Laity Congress, did not hold its own local version last year or, to this point, this year, as the Rules of the Archdiocese mandate, and no accountability has been given.

The rest of the schedule follows: