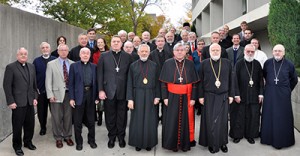 Mississauga, ON – The North American Orthodox Catholic Theological Consultation issued a statement on the plight of Christians in the Middle East at their meeting in Mississauga, Ontario, Oct. 24-26, calling for the release of a Greek Orthodox Metropolitan and a Syriac Orthodox Archbishop, both from Aleppo, Syria, and repudiating the kidnapping, torture and killing of not only Christians but all civilians. The full statement is available here.

The group meets every five years in Canada. Hosted by the Canadian Conference of Catholic Bishops, this year’s meeting was at the Mary Queen of the Apostles Renewal Center in Mississauga.

In its statement on the Middle East, the group wrote, “We urge the leadership of our churches to continue to intervene vigorously in behalf of the Christians of the Middle East, who live in fear for their lives, their communities, and the very future of Christianity in the region.”

The meeting was co-chaired by His Eminence Metropolitan Methodios of the Greek Orthodox Metropolis of Boston, and by Archbishop Joseph W. Tobin, Archdiocese of Indianapolis. Archbishop Tobin was recently appointed the Consultation’s Catholic co-chairman by Bishop Denis Madden of the Archdiocese of Baltimore and chairman of the Committee for Ecumenical and Interreligious Affairs of the United States Conference of Catholic Bishops.

The Consultation engaged in discussions pertinent to Orthodox – Catholic relations around such matters as synodality, papal primacy, priestly celibacy and the role of the laity. Susan Ashbrook Harvey, Ph.D., of Brown University and Sister of Charity of Leavenworth Susan K. Wood of Marquette University provided a summary of papers already presented on the role of the laity in the two churches; Father John Erickson, former dean and professor of canon law and church history at Saint Vladimir’s Orthodox Theological Seminary in Crestwood, New York, presented his paper on “Conciliarity or Synodality? Historical Notes on a Modern Issue”; Father John Galvin, professor of systematic theology at The Catholic University of America, presented a paper by Msgr. Thomas J. Green, “Lay Ministries in the Church: Comparative Reflections on the Eastern and Latin Codes”; and Father Peter Galadza, Kule Professor of Liturgy at the Metropolitan Andrey Sheptytsky Institute of Eastern Christian Studies in Ottawa, Ontario, summarized previously published papers on celibacy, marriage and the priesthood.

A highlight of the meeting was a panel discussion and meeting between seminarians from St. Augustine’s Seminary (Catholic) and The Greek Orthodox Theological Academy of Toronto. To foster an ecumenical spirit with the seminarians and to share and discuss the gifts which have resulted from the North American Orthodox Catholic Theological Consultation, the students shared their reflections on the Consultation’s 2010 agreed statement, “Steps Towards a Reunited Church: A Sketch of an Orthodox-Catholic Vision for the Future.” They also touched on the pastoral challenges resulting from the divisions of the two churches.

His Eminence Metropolitan Sotirios, of the Greek Orthodox Metropolis of Toronto and Exarch of All Canada, hosted the group for lunch before the discussion at the Greek Orthodox Metropolis of Toronto. Cardinal Thomas Collins of the Archdiocese of Toronto also encouraged the seminarians and members of the Consultation in their important work. The next meeting of the North American Orthodox Theological Consultation group is scheduled to take place June 2 – 4, 2014.