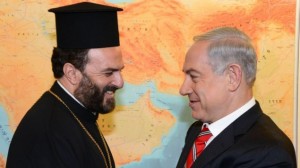 Source: The Times of Israel

Spokesman Essa Musleh told AFP that ecclesiastical authorities decided Tuesday to fire Father Gabriel Naddaf from his post in Jesus’s traditional childhood town of Nazareth, but were only now making their decision public.

“We warned him before to keep to his priestly duties and not to interfere in matters of the army,” Musleh said.

“When he did not heed our warning we held a meeting of the church court which decided to sack him.”

He said that no written notification had been given to Nadaf.

“We announce this now,” he said.

Nadaf told AFP he had received no official notification of his sacking and dismissed as media speculation reports that he had been fired.

“The procedure for sacking anyone as a priest is to invite him to the patriarch’s office where he will be presented with a letter of dismissal by the patriarch’s secretary,” he said.

“I have not received any call or letter from the patriarch’s office.”

Last month, Israel said it would start sending enlistment papers to all Christian Arabs of military service age, angering Arab lawmakers who accused the government of seeking to divide Christians from Muslims.

Service would not be compulsory for the 130,000 Christian Arabs as it is for Jews, an army spokesman said.

At present about 100 Christian Arabs volunteer for military service each year.

The more than 1.3 million Muslim Arabs who are Israeli citizens would not be sent papers at all, the spokesman added.

Naddaf welcomed the move by the military.

“Young people in the Christian community need to understand the importance of serving and getting involved in the country in which they live and which protects them, and in which we are full citizens,” he said last month.

Israel’s Arab minority, which makes up some 20 percent of the population, are the descendants of the 160,000 Palestinians who remained on their land when Israel was founded in 1948.