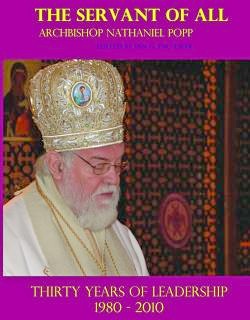 Orthodox Christian Laity Celebrates and Congratulates Archbishop Nathaniel of Detroit, Senior Hierarch of the Orthodox Church in America, Model of Servant Leadership and Visionary Advocate of Orthodox Christian Unity in the USA, as he celebrates his 40-year Anniversary as a Bishop, November 15, 2020.

We lead off this tribute to His Eminence, Archbishop Nathaniel with his address to the Orthodox Christian Laity 14th Annual Meeting, October 20, 2001, in Oakbrook, Illinois, one year after he joined the OCL Advisory Board.  His talk is entitled: A Possible Scenario: “The Celebration of the First Anniversary of the Autocephaly of the Orthodox Church of the United States.” Please read and reflect upon this visionary account.  This inspirational and visionary talk has motivated the OCL board, members, and friends all these years.  His vision keeps us moving ahead to promote a unified Orthodox Christian Church.  Look what we could accomplish!  We would be fulfilling Christ’s Great Commission to make disciples of all nations (Mt. 28:19).

Now view the video of his Vision of A Unified Church In North America.

Finally, read his essay: Where Have All the Flowers Gone? Or, Where Lies CEOYLA? printed in Solia-The Herald (April 2000) and reprinted in 2011 in the OCL 24th Annual Program Booklet “Remembering the Work and Leadership of the Council of Eastern Orthodox Youth Leaders of the Americas.”

Now you know why we consider His Eminence a national treasure and respect his guidance.  It should be noted that in 20 years, he has missed only four meetings.  We know him very well as our spiritual guide.  Board members, members, and staff persons are inspired by his patience, support, guidance and love.  He has served with us in good times and bad times.  He has always prayed with us, so that we could stay true to our purpose.

His Eminence is a leading spokesperson on Orthodox Christian Unity in the United States.  His work with OCL, within the Assembly of Bishops, his many writings on the topic, his work within Church Committees and support of Inter-Orthodox institutions are examples of his commitment to Unity.  He truly is an eloquent and knowledgeable spokesperson for this movement.

We also know about his work, many long years, as the head of the Romanian Episcopate.  His work is put together for all of us to read, ponder and to emulate. The book compiling his writings is “The Servant for All,” Archbishop Nathaniel Popp; Thirty Years of Leadership 1980-2010. It was presented to him on the 30th Anniversary of his ordination to the Episcopacy. During his tenure as ruling hierarch, the church has grown, is well organized and governed, and the message of Christ feeds those seeking spiritual renewal. He is especially sensitive to the needs of youth and young adults. His support of Orthodox Christian Fellowship (OCF) and Project Mexico is exemplary.  His work is made possible with the love, prayers, talent and resources of the clergy and laity and Auxiliary Bishop Andrei.

But the great beneficiary of the application of the gifts that God has provided to His Eminence is his work with the Holy Synod of the OCA.  He is the Church elder.  He has guided the OCA through turbulent times with an even keel.  He has provided wisdom to his brother bishops.  He has helped maintain the autocephaly of the OCA during his tenure as Locum Tenens. He continues to serve on the Holy Synod as its senior member.

May God continue to grant His Eminence many years to teach the Word of His Truth.  He is truly Worthy!