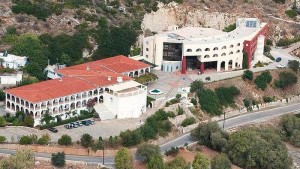 The Holy and Great Council of the Orthodox Church will take place at the Orthodox Academy of Crete in Kolympari of Chania.

2016 is a historic year for Orthodox Christianity throughout the world.  After over 1,200 years since the Seventh Ecumenical Council was held in Nicea (now part of Turkey) in 787, the Orthodox Church has scheduled the Holy and Great Council.  The meeting, which has been in the planning stages for more than fifty years, will be held from June 16-27, 2016 in Crete at the Orthodox Academy of Crete.

This event will provide the opportunity for the hierarchs and representatives of all of the autocephalous churches to approve the establishment of a unified Orthodox Church in the United States of America.  The administrative unification of the Church under a single Synod of Bishops is not only an event whose time has come, but it is an event which must not be delayed.

The hierarchs who will meet in Crete know that the existence of twelve separate, overlapping and often competing Orthodox jurisdictions in the same territory violates Orthodox canons and ecclesiology. These same hierarchs, meeting in Chambesy, Switzerland in 2009, signed protocols establishing Assemblies of Bishops across the globe to bring canonical order – order that is in its very essence unifying – to the churches in the New World.

ited States Assembly of Bishops has been meeting for the past six years, and much progress has been made to comply with the mandate given to them; but the time of the Holy and Great Council has now arrived, and it is the responsibility of the hierarchs at this Council to act.

Patriarch Bartholomew addressed the American Assembly of Bishops in Dallas in 2014. In his video address that unmistakably urged unity, he called upon the American Bishops to:

“… move beyond words to actions.  We know much better than what we actually do. We are called to put our theory and theology into practice.  We are called to move beyond what is ‘mine’ and what is ‘yours’ to what is ‘ours’.  From now on, this is how we should conceive and conduct all of our ministries and resources, all of our departments and initiatives. Otherwise, we do not practice what we preach.  It is really up to us to accept the challenge or refuse the call.”

This message is now directed to the hierarchs who will be meeting in Crete in June of this year. They alone, meeting in Council as one body, have the responsibility to bring the Orthodox Church in the United States into canonical order.  This Holy and Great Council should recognize the Assembly of Bishops of the United States as the Canonical Synod of the territory of the United States of America which should meet to elect its Presiding Hierarch, taking its place as an Autocephalous Church.

Orthodox Christian Laity (OCL) calls upon all Orthodox Christians in the United States of America and throughout the world to fervently pray for the success of this historic Holy and Great Council.

Read the formal statement, THE AMERICAN ORTHODOX CHURCH IS HOLY, CATHOLIC AND APOSTOLIC – IT MUST NOW BE ONE at: https://ocl.org/the-american-orthodox-church-is-holy-catholic-and-apostolic-it-must-now-be-one/.