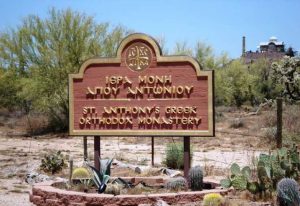 The entrance of St. Anthony’s monastery in Arizona.

The Orthodox Christian Organization (OCL) during a recent meeting adopted resolutions relating to monasteries that operate in many parts of the United States. The Christian Newswire reported on the issue as well.

The National Herald has reported many times about the issue of the monasteries and more specifically about their ecclesiastic belonging, theological teachings, and financial issues.

There are 18 total monasteries and nunneries in the United States. Technically, these monasteries are under the ecclesiastical and canonical jurisdiction of the Greek Orthodox Archdiocese of America and consequently, the local metropolises in which operate. Actually, though, they are under the total control of the priest monk Ephraim and his close associates, whose headquarters are at St. Anthony’s monastery in Florence, AZ. 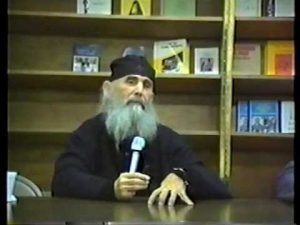 Fr. Ephraim, founder of the monasteries in the U.S.

TNH reported that a few years ago the Archdiocesan Council, with the insistence of its late Vice Chairman Michael Jaharis, had instituted a special committee to conduct a thorough examination of the monasteries, including their finances, but the issue was stalled because the metropolitans did not cooperate with the committee.

TNH has learned that a fundamentalist movement has been created in the Archdiocese, deriving from the monasteries called “Ephraimism.”  Many priests in the parishes have been influenced, and consequently, they pass their influence onto their parishes. Even at the School of Theology in Boston there are fanatic followers of elder Ephraim.

Archbishop Demetrios seems to be fully aware of what is going on with the monasteries but, unfortunately, he does not seem willing to confront the issue. Not even the Archdiocesan Regulations that specify the operation of the monasteries are implemented, and thus we have a situation whereby “a Church has been created within the Church.” Also, the Ecumenical Patriarchate is fully aware of the monasteries and their teachings. There are plenty of videos online with homilies of Fr. Ephraim that are quite revealing about his teachings and even “his prophesies.”

The OCL has brought the issue into light again asking about the implementation of the Regulations of governance of the monasteries. The resolutions follow:

“OCL respectfully calls upon the Eparchial Synod of the Greek Orthodox Archdiocese of America to enforce its own Regulations relating to the Monasteries operating under its auspices in the United States; that each metropolitan who has monasteries within his metropolis require full compliance by those monasteries with the letter and spirit of those Regulations; and, that all information concerning the operations of those monasteries, including but not limited to financial disclosures, be made public.

“OCL respectfully calls upon the Assembly of Bishops to request that all jurisdictions that have not yet done so adopt regulations regarding monasteries in the United States requiring transparency and accountability in financial reporting and Hierarchical oversight of theological teachings; that the Assembly encourage full compliance by those monasteries with the letter and spirit of those Regulations; and, that information relating to the well-being of the Church be made public.”

The Resolutions were adopted after the Board reviewed the provisions of the “General Regulations for the Establishment and Operation of Holy Monasteries in the Greek Orthodox Archdiocese of America” [Protocol #95] issued by the Ecumenical Patriarchate on February 16, 2005. The Regulations are set forth in the Official Documents of the Archdiocese on its website (goarch.org).