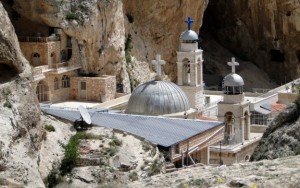 Most Maaloula residents have fled, but nuns and orphans remain holed up in Mar Tekla, one of the town’s two early Christian monasteries.

They are members of the eastern orthodox Church of Antioch. Its leader in the U.S., Metropolitan Philip Saliba, is concerned about their safety.

Philip is a strong supporter of Syrian President Bashar al-Assad. He joined church leaders in calling for a special “Day of Solidarity” in churches yesterday, with a special collection made for victims in Syria “who are suffering so terribly.”

It’s HERE AND NOW, and before the break we heard about a report from the U.N. today in which inspectors concluded that there is clear and convincing evidence that chemical weapons were used against civilians on a large scale in Syria last month. Meanwhile, the al-Qaeda-linked Islamic group the Al-Nusra Front is claiming responsibility for killing at least 30 members of President Assad’s minority Alawite sect during an attack on three villages in central Syria this last week. And Syrian military forces continue to battle rebels near the ancient Christian town of Ma’loula.

Now that is home to some of the oldest Christian sites in Syria, including a convent where nuns and orphans remain holed up, refusing to leave as fighting rages around the city. They are members of the Eastern Orthodox Church of Antioch, and their leader here in the U.S., Archbishop Philip Saliba, is concerned about them. He joins us on the line from his office in Englewood, New Jersey, Archbishop Saliba, tell us more about your fears.

ARCHBISHOP PHILIP SALIBA: My concern is about St. Thecla’s Convent and other holy places in Syria, which are threatened. The people of Ma’loula still speak the language of Christ, the Aramaic language, and this is the uniqueness of this town, and we are worried about its destruction. Already 400 families have left from Ma’loula. They fled to Damascus.

YOUNG: Can you describe it more? Describe the sites that are there.

SALIBA: Well, the sites, they are caves, you know, in the rocks. It’s a mountain full of ancient archeological sites like St. Thecla and Sarkis.

YOUNG: So the monastery and the convent there are carved into the mountain?

YOUNG: And we understand the sites have been there for 2,000 years.

SALIBA: Yes, 2,000 years because Christianity starts in Palestine and in Syria.

YOUNG: So as you said, most of the families, over 400, have fled the city. But the nuns are still there. What are they doing?

SALIBA: The nuns are taking care of a group of orphans, and they refuse to leave the convent. They say we’re still – we are ready to die and not leave these orphans behind.

YOUNG: Yeah.Well, I know you’ve spoken to I think a mother superior at the convent. What are you hearing?

SALIBA: When I spoke to the mother superior, she was surrounded by the rebels. She could not speak very freely. She said oh, oh, we are OK, we are OK, we – everything is all right, and that was not the case. I understood later on that one of the rebels knocked on the door of the convent, and the nuns said who is it, and he wouldn’t answer.

He told them to open the door otherwise I will put a bomb underneath the door and walk in. So they opened the door.

YOUNG: Well, when you say rebels, we know that there are a variety of rebels in Syria. Some are nationalists. Some are Syrians. At the beginning of the uprising…

YOUNG: So it’s not the Syrian rebels who are part of the nationalist movement that wanted to overthrow President Assad initially, it’s the rebels that have come in since, and many are from Islamist groups like the ones you’ve named. What would you like to see happen?

SALIBA: I would like to see a conference, an international conference, to bring the opposition in Syria. We have some Syrian rebels, too, but they are not that vicious like al-Qaida.

YOUNG: Look, your church and church members have been supporters of President Assad. His ruling regime is also in the minority in Syria. You felt protected by Assad in the past. You say you’d like to see a conference. Are you at all encouraged by the international conversation that’s going on? You were against the strikes because maybe they would strike more than just the weapons of mass destruction.

Now the conversation is about Syria giving up all of its chemical weapons. And who knows with the spotlight on that and with Russia involved, you know, maybe there will be a lessening of the civil war there. What is your hope with the ongoing conversation?

SALIBA: My hope is that the regime stays. The alternative is to have al-Qaida, al-Qaida that destroyed our Twin Towers in New York City and attacked the Pentagon and exploded a plane over Pennsylvania. They have been fighting us all over. They hate us as Americans. They hate the Christians. They have – they call us blasphemers, you know.

YOUNG: So it sounds like you have no sympathy for the original uprising against Assad by the majority of Syrians who, while you and the Christians felt protected by him, they did not.

SALIBA: Al-Qaida came later on, and Al-Nusra came later on. But the original rebels are good people. I would call them the real, genuine opposition. They were asking for something genuine. They want more democracy. They want more freedom. Some of them are still in Damascus, and they are talking to the government. They are very good people. I’m not saying that the original revolution was composed of al-Qaida and Al-Nusra, you see.

SALIBA: Yes, it’s very, very different, and I hope that we will not surrender Syria to such people because if we do, then there will be no more Christians in that country.

YOUNG: Archbishop Philip Saliba, primate of the Antiochian Archdiocese of North America, thank you so much.

Well, now an update on the shooting in Washington’s Navy Yard. According to the Associated Press, Navy officials are saying that at least six people have died. Washington, D.C. Police Chief Cathy Lanier held a press conference where she said one suspect is dead, but there may have been others.

CHIEF CATHY LANIER: The big concern for us right now is that we potentially have two other shooters that we have not located at this point.

CHAKRABARTI: And Lanier said that one suspect is a white male wearing a khaki military uniform with a beret, and the other suspect was a black male, approximately 50 years old, wearing an olive-colored, possibly military-style uniform. We have no information to believe, she said, that either are military personnel, but they are wearing military-style uniforms. Lanier also said that anyone with additional information should call the Metropolitan Police Department.