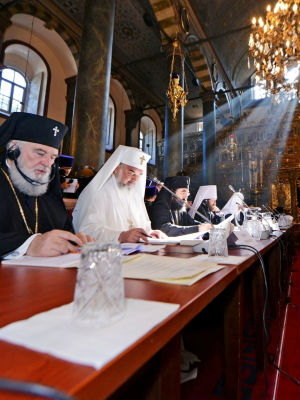 The patriarchs called for “peaceful negotiations and prayerful reconciliation in the ongoing crisis in Ukraine” and denounced what they said were “threats of violent occupation of sacred monasteries and churches” there.

Conference will be the first in over 1,200 years

Calling for a peaceful end to the crisis in Ukraine and denouncing violence which is driving Christians out of the Middle East, patriarchs of the world’s 250 million Orthodox Christians ended a rare summit in Istanbul this past weekend. At the summit, twelve heads of autonomous Orthodox churches also agreed to hold an ecumenical council of bishops in 2016, the first in over 1,200 years.

LOS ANGELES, CA (Catholic Online) – The Ukraine crisis overshadowed their talks. As the prelates left a special service at Saint George’s Cathedral, a woman in the crowd called out in Russian “Pray for Ukraine!” Two archbishops responded: “You pray, too!”

The patriarchs called for “peaceful negotiations and prayerful reconciliation in the ongoing crisis in Ukraine” and denounced what they said were “threats of violent occupation of sacred monasteries and churches” there.

Tantamount in all the inquiries facing the 2016 council will be how to balance relations among the Orthodox now that the Russian church, after seven decades of subjugation under communism. The church has since reemerged as an influential voice in world Christianity.

Ecumenical Patriarch Bartholomew will meet with Pope Francis in Jerusalem in May. The eldest leader, his church in Istanbul is tiny, with none of the resources the large Russian church enjoys.

He has no authority over other churches, unlike the power the pope has in Catholicism, the world’s largest church with 1.2 billion members. The communiqué stressed that all decisions at the council would be taken by consensus, a position the Russians strongly defended in preparations for the meeting.

The event is scheduled to be held in Hagia Irene, a Byzantine church building in the outer courtyard of the Ottoman sultans’ Topkapi Palace. Now a museum, it has not been used as a church since the Muslim conquest of Constantinople in 1453.

Related Stories
For Ukrainian Christians, a Test of Faith – Voice of America