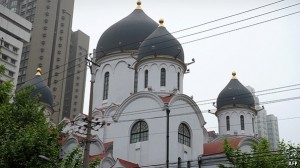 As A colleague has written in this week’s print edition, Christianity in China is experiencing spectacular, but turbulent, growth; by one estimate, the number of Chinese Christians could by 2030 have reached 250m—the largest Christian population of any country in the world.

Unless something extra-ordinary happens, only a tiny fraction (less than 0.1%) of those Christians will be of followers the eastern Orthodox church, which you might have expected, on geographical grounds, to be the faith’s prevailing form. Why is it so relatively weak? In part, perhaps, because Chinese Orthodoxy’s position has been affected by some arcane jurisdictional disputes, which to outsiders can seem like bald men fighting over a comb. On the other hand, China’s Orthodox Christians have a distinguished heritage and they may not have said their last word.

The story is a feast for church history buffs. Despite the Chinese authorities’ strong aversion to religions with “foreign” connections, Orthodoxy can stake a claim to legal existence in China because it is the historic (though hardly practised) faith of two small communities in northern China: the Albazinians who descend from Cossack prisoners who settled in the 17th century; and the Evenks, a people who straddle the Chinese-Siberian frontier.

A bit closer to present reality, Orthodoxy flourished among the tens of thousands of White Russian émigrés, and a few Chinese converts, who lived in Harbin and Shanghai in the 1930s. From 1934 onwards, their spiritual leader was an eccentric but gifted Russian archbishop, Ioann Maximovich, who was credited with extraordinary powers of healing and clairvoyance. In 1949, after the communist takeover, he led about 5,000 of his flock to the Philippines and then to the United States. A short, bedraggled figure in shabby robes, he lobbied Capitol Hill and somehow persuaded startled legislators to grant his followers asylum.

Whatever remained of the Russian Orthodox presence in China—which had begun with a spiritual mission established by Emperor Peter the Great—was virtually destroyed in the Cultural Revolution. These days the only place in mainland China where Russian services are regularly held is a recently rebuilt church in the country’s embassy in Beijing. Services happen much less often at a restored church in Shanghai (pictured above) and there are small, priest-less communities scattered through other parts of China. One Orthodox resident of Beijing told me he knew of about two dozen Chinese converts to Orthodoxy; they were usually people who had switched from evangelical Christianity or Catholicism after a deep study of Christian history. By some estimates the total number of Orthodox Christians in China is between 10,000 and 15,000.

In May last year, Patriarch Kirill of Moscow visited China and met President Xi Jinping; but these stratospheric connections didn’t immediately change the fact that not a single Chinese Orthodox priest functions in mainland China. The only ray of light comes from the fact that a handful of Chinese students have been allowed to study in Russian seminaries. They may eventually return to their homeland to serve as priests.

Hong Kong, with its more liberal regime, is a different story. In 1996, a few months before Britain handed the territory back to China, an Orthodox mission was established there by the Istanbul-based Ecumenical Patriarch, who by tradition enjoys primacy among the world’s Orthodox bishops (although the precise nature of that primacy is disputed). As the Ecumenical Patriarchate sees things, it was empowered by the Council of Chalcedon in 451 to be the main church authority in places outside the historically defined Christian lands (ie, places like China). In such countries, it argues, it should be the principal Orthodox Christian institution whose permission is required for any other Orthodox church to function. In that spirit the Hong Kong mission claims authority over Orthodoxy in China and south-east Asia.

The Russians reject this interpretation of Chalcedon, and they have established their own mission in Hong Kong. So a city of 7m people is served by two modestly flourishing but tiny Orthodox Christian organisations, operating in rivalry rather than synergy—competing not so much to win converts as to fly an institutional flag. It’s not a happy or dignified situation.

Doubtless some of the country’s hard-pressed Orthodox would give the proper pious retort: they are resting their hopes not on earthly institutions as on the invisible presence of saints and martyrs from previous generations. And today might be a good day for them to invoke the help of Archbishop Maximovich. He had a particular aversion to the idea of Christians celebrating Hallowe’en which he saw as a festival of darkness. Indeed, he once gate-crashed a Hallowe’en ball which some of his parishioners were attending, and shamed the band into ceasing its music.