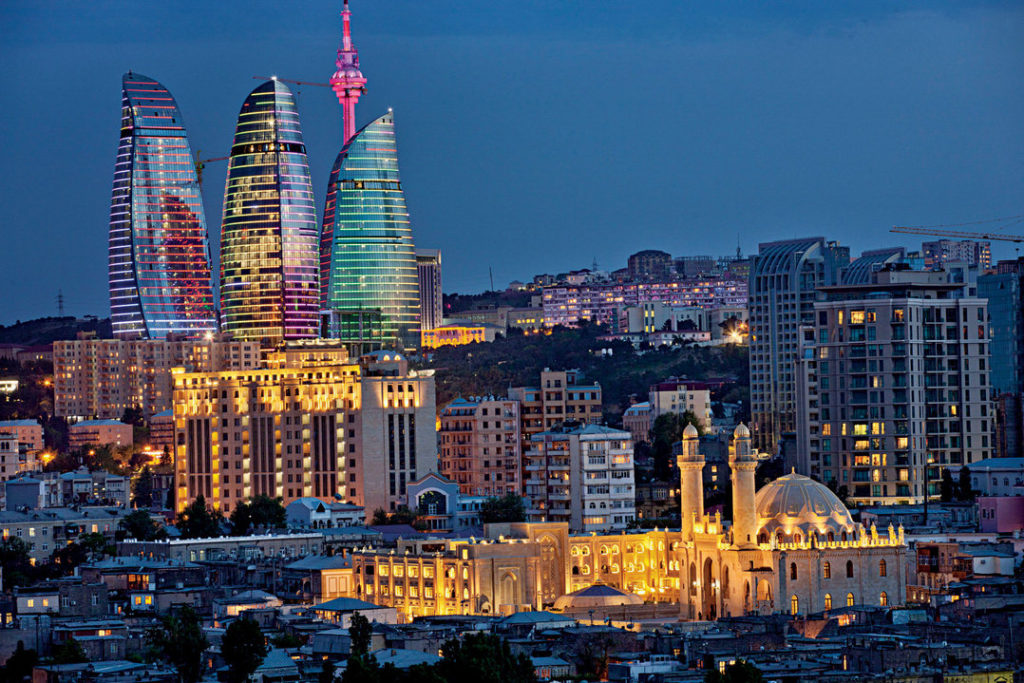 The Republic of Azerbaijan is a Caspian coastal state in the Southern Caucasus which re-established its independence upon the collapse of the Soviet Union in 1991. Located at the crossroads of Eastern Europe and Southwest Asia, Azerbaijan acts as a bridge-builder in the dialogue of both civilizations. Historical background, geographical position, and population’s ethnic composition gave rise to the existence of various religions on its territory. At certain periods, idolatry, fire-worship, Zoroastrianism, Judaism, Christianity, Islam and a number of other beliefs spread across to varying degrees, mutual influence of which had drawn up the originality of country’s religious palette. The majority of population, more precisely 96%, professes Islam. Here also live Christians, Jews and representatives of other faiths. According to the Constitution, religion is separated from the state. Azerbaijan is one of 11 Muslim majority countries in which secularism is determined constitutionally. The state equally applies to all religious beliefs from the declared principles of secularism.

Today, by the number of followers Christianity is the second widespread religion in Azerbaijan following Islam. The landscape of this religion in Azerbaijan is quite diverse and rich. Thus, followers of the Alban-Udi religious community, as well as Orthodox, Catholics, representatives of various Protestant denominations and new Christian religious movements live here. Christians constitute about 2 percent of country’s population. These are predominantly Russians, Belarusians, Greeks, Georgians, Udins, Ukrainians and representatives of some other minority peoples. Although Catholics are ranked first, Protestants second, Orthodox believers third among the Christian confessions in the world, the landscape in Azerbaijan is different: the largest Christian confession here is Orthodoxy, represented by the Russian and Georgian Orthodox churches.

The Russian Orthodox Church was established in Azerbaijan in XIX century when tsarist troops set foot on this ancient land. After the Tsarist invasion, the Church was deeply rooted in the country as a result of resettlement of Russian, Belarusian, Ukrainian and other Orthodox peoples, and soon became the largest Christian confession. As a church organization, the history of the Russian Orthodox Church in the country begins with the construction of Chapel of St. Nicholas the Wonderworker in the place of an old mosque near the Maiden Tower in 1815.

During Russian Empire the Russian Church had great privileges until the February Revolution in 1917. As a result of the revolution, tsarism collapsed and former colonies of the empire declared their independence. The Azerbaijani people did not stand aloof from historical and political developments and took steps to restore the statehood traditions. Thus, the Azerbaijan Democratic Republic was established on May 28, 1918. New page in the field of state-religion relations has been turned in the country. The ADR with its Muslim majority population did not declare Islam as an official religion and did not give preference to any religion or denomination. The Orthodox temples in ADR operated freely; the Orthodox believers did not suffer any discrimination and enjoyed the rights recognized for all. It is enough to mention the fact that the “Slavic-Russian Society” fraction was presented in the Parliament of Azerbaijan Democratic Republic. Freedom of conscience in the Republic had been eliminated when XI Red Army troops occupied Azerbaijan and the Soviet power was establishment in the country on 28 April, 1920.

After the USSR ceased to exist and Azerbaijani people restored statehood traditions on October 18, 1991, number of significant historical events took place in the life of the Orthodox community, one of which is re-establishment of Baku and Caspian Eparchy. On 15 November, 2013 the Orthodox Religious-Cultural Center of Baku and Azerbaijan Eparchy was opened within the Holy Myrrh-bearers Church. The Eparchy is engaged in extensive charitable activities. For example, a charity canteen for orphans is functioning in the Orthodox Church of Archangel Michael. At the same time, the eparchy annually hosts charity concerts, holds Sunday schools and catechism courses, publishes “Pravoslavnıy Kaspi” (Orthodox Caspian) journal and “Pravoslavniy vestnik” (Orthodox herald) newspaper.

The Baku and Azerbaijan diocese mainly operates on voluntary donations of churchgoers, sales of religious goods and, most importantly, the financial assistance of Azerbaijani government. Today, the Baku and Azerbaijan diocese contributes to the development of inter-religious relations and strengthening of tolerant atmosphere in the country. Cooperation between the government and diocese is at a high level and religious needs of Orthodox people are always at the centre of government’s attention.

Referring to Orthodoxy in Azerbaijan, it is worth mentioning Orthodox Russians, namely Old Believers (Starovers, Raskolniks), who do not recognize the Moscow Patriarchate. The presence of first Raskolniks in the country dates back to the 30s of the XIX century. They settled in the Altiaghac region of Baku province and hid in caves from the tsarist government’s persecution. The Molokans living here provided them with cereals. Unfortunately, today the exact number of Old Believers living in Azerbaijan is not known precisely.

As can be seen from the above, religious-ethnic tolerance considered one of the democratic values in the progressive world, has become an exemplary form of Azerbaijani society. As a multi-ethnic and multi-confessional state, today the Republic of Azerbaijan pursues a policy of fully integration into the world community, supports all efforts to protect religious freedom in the world.

Aykhan Hasanov lives in Azerbaijan and work at the International Relations Department of the State Committee on Religious Associations of the Republic of Azerbaijan. View his CV here.