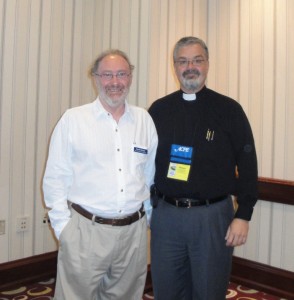 SYOSSET, NY [OCA]  On May 13, 2013, the Board of the Association for Clinical Pastoral Education (ACPE) unanimously approved the application forwarded by the Orthodox Church in America’s Department of Institutional Chaplaincies seeking formal faith tradition membership in the organization.  The original application had been submitted to ACPE in December 2012.

ACPE was formed in 1967 to bring together two organizations—the Council for Clinical Training and the Institute for Pastoral Care, both established in the mid-1930—and several faith-based accrediting bodies, including Lutheran and Southern Baptist associations. The latter became denominational representatives as merger discussions continued. The National Council of Churches and the Association of Theological Schools played roles in the merger process.

“In fact it appears that all were on board to come together, and brought along representatives of the council and the institute toward a formal merger plan over developing a ‘federation of accrediting bodies,’ representing the other popular plan to move forward,” said Priest Dr. Steven Voytovich, Director of the OCA Department of Institutional Chaplaincies.  “Due to the ‘denominational’ participation early on in its formation, faith group membership and representation is unique and formally structured in ACPE as compared to other credentialing bodies (APC, AAPC, ACCA, CPSP). Even though their governance is being restructured, denominational representation remains one of four ex-officio board members. The OCA has joined approximately 30 faith groups in taking the step of formal membership in order that faith traditions continue to be a vibrant presence in the clinical training arena.”

A main function of the OCA Department of Institutional Chaplains is to review and process requests for formal endorsement for men and women to serve in non-military institutional settings such as hospitals, hospices, long-term care, emergency response, corrections, and other settings, and to approach credentialing bodies for certification as chaplains, CPE supervisors, and pastoral counselors.

“The Department also seeks to support endorsed persons in their ministry contexts. Recommendations for endorsement are forwarded by this department to the Office of the Metropolitan,” Father Steven continued.  “ACPE membership represents another formal step this department has taken to be an active presence in the pastoral care and counseling community in our country and beyond.”

According to Father Steven, “a formal endorsement process was instituted by the OCA in 2003, and the OCA became a recognized Endorser in the Commission on Ministry in Specialized Settings in 2005.  The OCA joined the Association of Religious Endorsing Bodies (AREB) in 2007.”

Father Steven, who currently serves as AREB Chair, shared the importance of our Orthodox witness in this greater caregiving arena as a means to fulfill in part the OCA’s mission “to be the Body of Christ in North America” and, as noted in the Tomos of Autocephaly, to “maintain direct relations with all other Churches and confessions, Orthodox and non-Orthodox alike.

“It is a blessing to be able to support our mission in this very meaningful way,” he added.  “The OCA currently has about a dozen endorsed chaplains serving across the country in a variety of settings, and holding a broad spectrum of certifications from among the credentialing bodies.  All the endorsers meet during these national conferences with credentialing body leadership.

“The Rev. Deryck Durston, Interim Executive Director of ACPE, has pushed to have endorsement formally brought into that office during his ten-year tenure in the ACPE national office,” Father Steven continued.  “Even though he will soon be leaving his director role, Rev. Deryck will continue to be the ACPE consultant for endorsement. AREB is grateful for the working relationship with all the credentialing bodies to assist those seeking certification to obtain proper endorsement, and for the formal nature of this relationship with ACPE.”

Additional information on the work of the OCA Department of Institutional Chaplaincies may be viewed here or here.