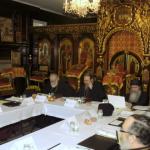 The fall session of the Holy Synod of Bishops of the Orthodox Church in America concluded on Thursday, October 6, 2011.

Highlights of the session, drawn from the minutes by Archpriest Eric G. Tosi, OCA Secretary, include the following.

On Tuesday, October, 4, the hierarchs:

On Wednesday, October 5, the hierarchs:

On Thursday, October 6, the hierarchs attended the Divine Liturgy marking the Feast of Saint Innocent [Veniaminov] of Moscow in the Chancery’s Saint Sergius of Radonezh Chapel, after which they offered prayers for His Eminence, the late Archbishop Dmitri, retired Archbishop of Dallas and the South, on the 40th day of his repose.

The Holy Synod approved psychological testing for all candidates for ordination, clarified procedures for ordination, and blessed the Board’s ongoing work in drafting a formal policy document.  This will be released when completed.