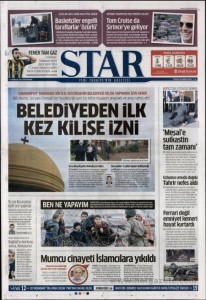 The municipal council of Istanbul has decided to give the permission to rebuild the St. Stefanos (Yeşilköy) Church, the first time the Turkish Republic has allowed an Orthodox religious institution to be renovated.

The church is under the aegis of the Arab-Orthodox community which had asked many times for their own place for prayer.

According to the Turkish newspaper STAR, the temple’s rebuilding can be initiated after taking the formal approval of the Council on Monuments. Churches in Istanbul date back to 1923, when the Turkish state was founded, and until recent years restoration of historic churches and monuments was forbidden.

Turkey is still bidding to become a member of the European Union, whose officials have told government officials to be more tolerant on religious issues, although it still prohibits opening the closed Halki Seminary.