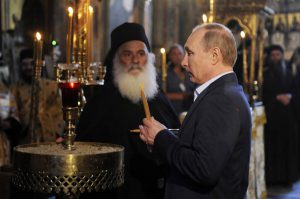 Pope Francis’ enormous popularity — his Twitter accounts in different languages have a total of about 30 million followers, about as many as Bill Gates and more than Adele — is a consequence of his openness to diversity and a softer approach to dogma. He represents a modernized Catholic Church. By contrast, the world’s second biggest Christian denomination is proving so resistant to modernization that its plans to adopt some timid changes for the first time since the year 787 have fallen through.

The Pan-Orthodox Council that is scheduled to begin on Crete this weekend was more than 50 years in the making. It was intended to establish a common modern agenda for the 14 Eastern Orthodox churches, with a total of 225 million to 300 million faithful. In recent years, thanks to Ecumenical Patriarch Bartholomew I, traditionally considered first among equals by Orthodox church leaders, the preparations were moving along nicely: Draft documents were approved, meetings among the heads of the 14 churches were held, and plans were made for a bigger gathering of dignitaries. Yet the Russian Orthodox church, the biggest of all potential participants, has pulled out at the last moment, following the defection of three smaller churches, and the Council has been rendered meaningless or even damaging to future attempts to bring Orthodox Christianity into the 21st century.

Pope Francis has made surprisingly liberal statements on matters such as remarriage, abortion and homosexuality; the Orthodox leaders never meant to go as far as that. Their draft document on the church’s mission in the modern world skirts contentious issues. Its section on discrimination, for example, fails to mention sexual orientation. The document affirms love and peace as the church’s ideals, criticizes racism, inequality, moral degradation and “liberal globalism” — it’s an agenda as conservative as it is anodyne.

Yet the Council could have changed the Orthodox churches’ ossified attitude toward the rest of Cristendom, which has not changed since the Dark Ages. To Orthodox Christians, all other denominations are heresies, not churches. Some steps toward more ecumenism and more openness would already constitute serious progress for what is now the most conservative of Christian denominations. Patriarch Bartholomew, a friend of Pope Francis’s, was determined to push it through.

Russian Orthodox Church Patriarch Kirill appeared to be among the modernizers. In February, he held an extraordinary meeting with Pope Francis. They signed a joint declaration that showed the pope’s willingness to concede political points important to Moscow just to keep the dialogue going. The move got Kirill in hot water with the more conservative believers at home: Some priests in Russia even stopped mentioning the Patriarch in their prayers and were promptly removed from their parishes; it was harder to stop priests in Ukraine, formerly loyal to the Moscow Patriarchate, from rebelling in the same way.

Rumors spread among Russian conservative believers that the scheduled Pan-Orthodox Council was planning to allow bishops to marry, priests to remarry, abolish monkhood or move all the churches to the same calendar — the one the rest of the world uses (in Russia, Christmas is celebrated 13 days later than in the rest of the world because the Church hews to the Julian calendar). The Patriarchate had to issue a special statement to allay those fears.

Conservative forces in other Orthodox churches protested a draft document on relations with the rest of the Christian world: They argued that its call for “restoring Christian unity” went against the dogma. The Georgian Church — like conservative elements elsewhere — had a separate problem with a proposal that would allow marriages between Orthodox believers and other Christians if the children are brought up Orthodox.

The conservative pushback alone may not not have torpedoed the Council. Kirill, however, appeared to be concerned with Bartholomew’s role as the chief organizer. In Istanbul, where the Ecumenical Patriarch is based, his flock is limited to about 3,000 people, yet if he managed to bring the Orthodox confessions closer together and open them to the rest of the world, he would end up with an oversized role. The Russian Patriarch couldn’t really express these fears publicly, so the Bulgarian church, closely allied to the Russian one, was the first to call for a postponement of the Council, objecting, among other things, to the proposed seating arrangements that would give Bartholomew too much prominence. When their call was ignored, the Bulgarians withdrew from the Congress.

The Georgians quickly followed suit. The Antiochian Church, with parishes in Syria and Lebanon, withdrew for its own reasons — a dispute with the Patriarchate of Jerusalem over which of them should cater to Orthodox believers in Qatar, along with a perceived lack of attention to its plight as a result of the Syrian war. The defections allowed Moscow to withdraw, too, claiming the Council wouldn’t be truly pan-Orthodox without all the churches participating.

Even if all the churches took part in the Council, the Orthodox faith would still have a long way to go. Now, the disagreements and the internal strife are making the goal of contemporary relevance all but unattainable.

The ultraconservatism and inflexibility of the faith is an underestimated factor that’s hindering the modernization of countries such as Russia and Greece. Until Orthodox Christianity takes steps toward the rest of the Christian world and starts relaxing its harsh dogmatism, these nations will continue to feel the pull of their distant past.

(Corrects sixth paragraph to acknowledge that Russian priests who aren’t monks are already allowed to marry.)

This column does not necessarily reflect the opinion of the editorial board or Bloomberg LP and its owners.

To contact the author of this story: Leonid Bershidsky at [email protected]