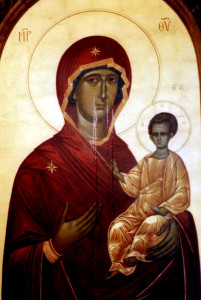 Religious leaders from the Orthodox Christian Churches will come together Tuesday night April 22 to commemorate the discovery of the Icon of the Virgin Mary that began tearing/weeping 20 years ago.

Parishioners at St. George Antiochian Orthodox Church, 1220 S. 60th Court in Cicero, noticed that an Icon of the Virgin Mary began tearing, first with one tear and later by the end of the night with four separate tears. The tears were dabbed in with cotton and mixed with oil which was distributed to more than 1,000 Christian Churches around the world, and 100,000 cotton swabs given to visitors that have numbered more than 1 million in the past 20 years.

Economos Pastor Nicholas Dahdal will join Antiochian Orthodox Bishop Anthony who will preside over the commemoration which begins at 6:30 pm, exactly 20 years from when the weeping Icon was discovered at the Church. Celebrations will continue through the following day, Wednesday April 23.