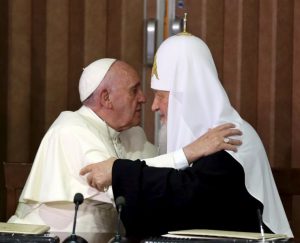 Is the thousand-year-old breach between the Catholic and Orthodox Churches a little closer to being mended?

Given the history of suspicion, hostility, political game-playing and theological intransigence that has marked the process so far, it seems unlikely. But after a significant meeting between theologians from the two sides, there are signs that change is in the wind.

The 14th Plenary Session of the Joint Commission for Theological Dialogue between the Orthodox Church and the Roman Catholic Church met in Chieti, Italy, and has just completed its work.

What’s significant is that it has approved a common document on a key cause of the division between the Churches. Its title is unpromising – Synodality and Primacy during the First Millennium: Towards a Common Understanding in Service to the Unity of the Church – but it deals with an issue of supreme importance: who’s in charge? According to Roman Catholics, it’s the pope; according to the Orthodox, he may be first among equals but he has no authority over patriarchs of the other Churches. So the question of how the pope’s office was seen in the formative years of the Christian Church, before the Great Schism that divided East and West in 1054, is absolutely crucial.

The Chieta document is a working paper that will go back to the Churches for discussion and – possibly, in time – approval. It follows a previous version approved at a meeting in Ravenna in 2007, which established that – with different nuances between Eastern and Western understandings of the word – the primacy of the Bishop of Rome was accepted by all Christians. But on that occasion the representatives of the Russian Orthodox Church walked out before discussions had even begun and were not party to the final agreement. Now, however, they are.

This is only the beginning of the next stage of the journey, and it would be unwise to predict anything approaching the “reunion” of the two communions in anything like the foreseeable future. Papal primacy is one thing, but the exact form of this primacy is another thing entirely – and there are three major stumbling blocks for the Orthodox Church on the road.

The first is the status of the Uniate or Eastern Catholic Churches, which are Orthodox in theology and liturgy but in communion with Rome. Orthodox Churches see this as unacceptable. The Russian Orthodox Church’s ‘foreign minister’, Metropolitan Hilarion, said after the Chieta meeting: “I can predict that there will be many divisive issues and that we will not agree on every point. However, the aim of our dialogue is not simply to agree on the points of which we agree anyhow, but we have to explore also the points of disagreement. And the issue of Uniatism is one such extremely burning issues.” The problem is particularly acute with regard to the Ukrainian Greek Catholics, who have infuriated the Russians both by their staunch Ukrainian loyalty and their insistence that they are a valid Church with no intention of submitting to Moscow’s ecclesiastical authority.

The second is what one eminent Orthodox theologian, Metropolitan Zizioulas of Pergamon, refers to as the “Orthodox Taliban”. Stridently nationalist and theologically fundamentalist, these priests and scholars are vehemently opposed to any form of dialogue or compromise with Rome or with Protestant Churches, which they refuse to recognise as Churches at all. The Georgian Church pulled out of the recent Pan-Orthodox Council because it believed it gave too much away to ecumenism. On Wednesday this week Georgian Orthodox ultranationalists and priests demonstrated outside the Vatican embassy in Tblisi to protest the forthcoming visit of Pope Francis: the organisers said the visit amounts to a “spiritual aggression by the Vatican and an attempt by the Catholic Church to colonise Georgia”.

It is hard to see this as anything but xenophobic paranoia, but it represents a deep suspicion that is felt elsewhere in the Orthodox world as well. Against such resistance, any advances in understanding are likely to take decades rather than years.

The third is the wider political landscape, particularly as it affects the Russian Orthodox Church. It dwarfs the others in terms of its numbers and wealth, and it is intimately tied to the regime of Vladimir Putin. As well as theological considerations, there are others that are purely political: how would any rapprochment between the Orthodox East and Catholic West play out in terms of Russia’s domestic and foreign affairs?

There’s still a long road ahead. As Gianni Valente for Vatican Insider puts it, it’s best to avoid both “sugary optimism and defeatist pessimism when judging the forced stops, U-turns and abrupt restarts in the journey the Catholic and Orthodox Churches have embarked on to overcome age-old divisions and restore sacramental unity”. But this agreement is something, and not to be sneezed at.