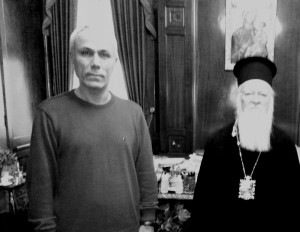 Mehmet Ali Agca with Patriarch Bartholomew I of Constantinople

Mehmet Ali Agca, who shot and wounded Pope John Paul II in May 1981, met this week with the Orthodox Patriarch Bartholomew I of Constantinople.

The January 7 conversation took place at Agca’s request. Agca reportedly told the Ecumenical Patriarch that he had spent many hours reading the Bible while in prison.

After his conviction in an Italian court for the attempted murder of the Pontiff, Agca spent 19 years in prison in Rome before he was released in 2000, as part of a general amnesty declared by Italian authorities at the prompting of Pope John Paul II himself. He was returned to his native Turkey, where he served a separate sentence for an earlier murder conviction. He was finally released in January 2010.