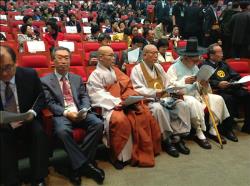 SYOSSET, NY [OCA] – The 10th Assembly of the World Council of Churches opened on October 30, 2013 in Busan, Republic of Korea.

According to Archpriest Leonid Kishkovsky, OCA Director of External Affairs, all the Orthodox Churches, with the exception of the Churches of Bulgaria and Georgia, are members of the WCC. The Assembly provides a valuable opportunity for inter-Orthodox conversation and sharing of perspectives.

The WCC Assembly is a significant global event at which the Protestant and Orthodox churches not only encounter one another and work together but also endeavor to witness to the Christian faith together.

The Assembly theme is “God of life, lead us to justice and peace.” It is anticipated that some 5,000 people, including 2,500 Koreans, will participate.

The WCC promotes Christian unity in faith, witness, and service for a just and peaceful world. An ecumenical fellowship of churches founded in 1948, by the end of 2012 the WCC had 345 member churches, representing more than 500 million Christians from Orthodox, Protestant, Anglican and other traditions in over 110 countries. The WCC works cooperatively with the Roman Catholic Church. The WCC general secretary is the Rev. Dr. Olav Fykse Tveit, from the (Lutheran) Church of Norway.

Among the individuals who have represented the OCA in the governance and faith and order work of the WCC have been Protopresbyter John Meyendorff, Protopresbyter Thomas Hopko, Archpriest Leonid Kishkovsky, Professor Peter Bouteneff, and Dr. Constance Tarasar.

From time to time the Orthodox participation in the WCC has experienced significant tension as the Orthodox witnessed to the Orthodox theological and ecclesiological tradition in the midst of Protestant churches carrying a different theological and ecclesiological perspective. Nevertheless, in most cases the Orthodox churches remain in the WCC in a desire both to give a clear voice to the Orthodox convictions and to find ways to collaborate with other Christians where such collaboration is necessary and possible. Such collaboration is sometimes a moral requirement—for example, in defense of Christian churches and communities in the Middle East.