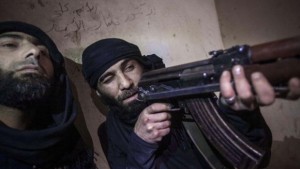 Yesterday, an Antiochian Orthodox priest was kidnapped by Jabhat Al-Nusra from his monastery outside of the west Idlib city of Jisr Al-Shughour. Sources in the area confirmed the kidnapping of Father Hanna Moussa of Qanaya from the St. Joseph Monastery by members of the Al-Qaeda linked terrorist organization, following his morning prayers in the predominately Christian village. Like many of the villagers of Qanaya, Father Hanna refused to leave the village he spent much of his life in, despite threats from Syrian Opposition forces.

Father Hanna was not the only civilian to be kidnapped by Jabhat Al-Nusra; civilians in the village were also forced to hurry into a vehicle to be transported to the Nusra-controlled village of Darkoush. The terrorists looted and stole church relics and documents that they claimed would be used as evidence. The civilians will be seen by the “Shariah Courts” in the city, where they face charges that could ultimately lead to their execution by the Al-Nusra Front.

This is not the first time Jabhat Al-Nusra has kidnapped a religious figure – 9 nuns were kidnapped during the rebel offensive in the Christian village of Ma’aloula last December; it took a month of negotiations to secure their release. For other religious figures kidnapped by Al-Nusra Front, their status is unknown; this includes the two bishops from Aleppo that have been reported missing for over two years.