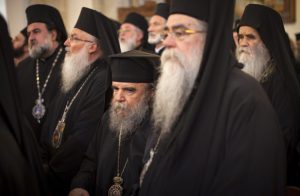 Despite the fact that four of the fourteen independent Eastern Orthodox churches of the world opted not to show up, an expert on Orthodoxy insists that the “Holy and Great Council” in Crete in late June was significant, arguing that meeting together to hash out issues is part of the DNA of Orthodoxy.

From June 19-26, leaders of ten of the fourteen “autocephalous,” or independent, Eastern Orthodox churches of the world met together on the island of Crete, marking the first time such a representative summit of Orthodox churches had assembled in a millennium.

Originally the idea was for the “Holy and Great Council” to be even more inclusive, bringing together leaders of all 14 churches, but at the last minute four of them backed out – including the all-important Russian Orthodox, who claim two-thirds of the roughly 275 million Orthodox Christians in the world.

Nevertheless, under the leadership of Ecumenical Patriarch Bartholomew of Constantinople, traditionally regarded as “first among equals” in the Orthodox world, the council pressed on.

Bartholomew said it’s critically important for the Orthodox to gather in such a setting, saying that without “synodality,” meaning the practice of getting together, “the apostolic message falls prey to various heresies and ruses of human reason.”

Recently, a Brazilian-born journalist based in Rome named Filipe Domingues spoke to Nikos-Giorgos Papachristou, a Greek expert on Orthodoxy who’s currently in Rome at the invitation of the Vatican’s Pontifical Council for Promoting Christian Unity, about the significance of the council.

The interview originally appeared in the Brazilian news outlet O São Paulo; what follows is an English version of their conversation.

Domingues: What is the Orthodox Synod and why is it important?

Papachristou: The Holy and Great  Synod (Council) of the Orthodox Church was an historic event in the life of Orthodox Christianity. It was the fruit of preparations that started in the early 60s, but various historical reasons and difficulties encountered by local Orthodox Churches delayed its implementation.

In the first millennium of united Christianity, there were large meetings that were called “ecumenical,” but also many smaller meetings where the bishops of the Church faced various issues and problems. After the Great Schism between Rome and Constantinople, in 1054, the patriarchates of the East (Constantinople, Alexandria, Antioch and Jerusalem) and the autocephalous Church of Cyprus continued the tradition of conciliarity, i.e.,  jointly tackling ecclesiastical issues.

After the 15th century, and especially after the 19th century, the Ecumenical Patriarchate of Constantinople recognized as autocephalous the Churches of Russia, Serbia, Romania, Bulgaria, Georgia, Greece, Albania, Poland as well as the local Czech and Slovak Orthodox Church.

So the importance of the Holy and Great Council is enormous, because it was the first time all were together, ancient and newer local Orthodox churches, in a Council to discuss the issues that concern the people of God.

Which Churches were represented? Why did the Russians decide not to join?

Shortly before the Holy and Great Council started, four local churches – the Patriarchates of Antioch, Russia, Bulgaria and Georgia – announced that they will not participate, despite the fact that last January, when the Orthodox primates met in Geneva, they were committed to participate.

The Patriarchate of Antioch said it would not take part because of a dispute with the Patriarchate of Jerusalem about jurisdiction over Qatar, a region where there are  few Christians, most of them working for foreign companies.

Unfortunately, the absence of the Patriarchate of Antioch eliminated the opportunity to convey the anguish and pain that this local church is facing because of the war in Syria, where thousands of Christians have been killed and entire cities dissolved, while millions of people have been uprooted from the land of their ancestors.

The other three local churches offered various excuses to ask for the postponement of the Summit.

Was the absence of some churches a big problem for the synod?

The primates and delegations of bishops of the ten local Orthodox churches that participated in the council at Crete expressed their regret at the sudden decision of the four local churches not to take part.

All of them, however, stressed that this would not affect the nature of the summit, since even in ecumenical councils there were cases where some of the local churches were not represented.

What were the important issues?

The mission of the Orthodox Church in modern times, and its relations with the rest of the Christian world, were perhaps the most important issues discussed by the primates and bishops. The former refers to dialogue with society, and the latter to the dialogue with other Christian churches and confessions.

What I would like to mention in relation to the second document is that many times, the Orthodox Church seems cautious or conservative towards its relations with the rest of the Christian world. This is due to the different experiences and historical reasons faced by each of the local Orthodox churches.

Given these different opinions, experiences and perceptions, the primates and bishops, with much dialogue and prayer, tried to express a common position, a common voice for our Christian brothers and sisters with whom we are not in ecclesiastical communion.

They discussed issues concerning the interior of Orthodoxy, such as the “diaspora” as well as rules on fasting and marriage in contemporary social reality formed in a globalized world.

How would you describe the relations of the Catholic and Orthodox churches today? How is dialogue going?

The Roman Catholic and the Orthodox Churches have been in communication – a “dialogue of love,” as it is known – over the last 50 years, after more than 500 years of silence between themselves.

Since 1980, an official theological dialogue continues despite occasional difficulties. That’s an important fact which was pointed out by most of the fathers who participated in the Holy and Great Council.

In my opinion, all Christians should support and pray with all our power to strengthen the efforts of the two Churches to come even closer, to solve problems and differences, and to restore with the help of God visible unity and communion between them.

Patriarch Bartholomew had a crucial role in this synod. Could you tell us how he feels about it?

Ecumenical Patriarch Bartholomew worked from the first moment of his election in 1991 for the realization of a Holy and Great Council of the Orthodox Church. Both in his speech at the opening of the conference and on other occasions, he underlined the belief that only through the Church’s synodal system (conciliarity) can it cope with the challenges of modern times.

“It is not merely a matter of canonical tradition, which we have received and preserve, but of fundamental theological and doctrinal truth, without which there is no salvation,” he said.

“In confessing our faith in the holy Creed in the one, holy, catholic and apostolic Church, at the same time we proclaim her synodality, which incarnates in history all those characteristics of the mystery of the Church, that is to say, her unity, holiness, universality and apostolicity.”

“Without synodality, the unity of the Church is severed, the sanctity of its members is reduced to mere individual morality and articulation about virtue, catholicity is sacrificed in favor of particular individual, collective, national and other secular interests or intentions, and the apostolic message falls prey to various heresies and ruses of human reason,” the Ecumenical Patriarch said.