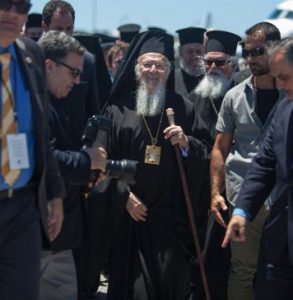 Ecumenical Patriarch Bartholomew landed in Crete for the Holy and Great Council, despite a pullout by Russia at the last moment.

ATHENS, Greece (AP) — The spiritual leader of the world’s Orthodox Christians on Wednesday said a historic meeting of church leaders — the first in more than a millennium — will take place despite a pullout by Russia, the fourth Orthodox church to say it won’t attend the June gathering in Crete.

Istanbul-based Ecumenical Patriarch Bartholomew I, who ranks as “the first among equals,” said he hopes the Russian church and three others who have chosen not to come will change their minds.

The weeklong Holy and Great Council, which is to begin on Sunday, was meant to bring together the leaders of the 14 independent Orthodox churches to promote unity among the world’s 300 million Orthodox Christians.

The gathering on the island of Crete has been 55 years in preparation and planning.

“I hope the churches, even at the last minute, revise their decisions and honor their signatures and come to Crete,” Bartholomew said as he arrived on the island.

He was referring to a unanimous decision by all the churches at a January meeting in Geneva to meet in Crete and discuss the mission and role of the Orthodox Church and its global flock, issues relating to the function of the churches and relations with other Christian faiths. Unity of the Orthodox churches is considered a key prerequisite to any reconciliation with the Vatican.

“The decision burdens those churches and their primates, because just five months ago in Geneva during a meeting of the Orthodox primates we decided and signed to come to Crete in June to carry out this vision we have had for many years,” he said.

On Tuesday, the Russian Orthodox Church said it was waiting for the Ecumenical Patriarchate to respond to its proposal to delay the meeting in order to settle differences that have prompted the other churches to declare they will not participate.

A spokesman for Bartholomew said it was not in the patriarch’s hands to declare a postponement, saying he did not have the authority to revoke a joint decision taken by all the 14 leaders in January.

“The ecumenical patriarch can’t change a unanimous decision taken by all the churches,” the Rev. John Chryssavgis told The Associated Press. “Bartholomew is not the pope, he can’t just decide.”

Unlike the Roman Catholics, the Orthodox churches are independent and have their own leadership. For example, Patriarch Kirill of Moscow is head of the world’s largest Orthodox Church, with about 100 million faithful, but is considered equal to other patriarchs regardless of the size of their flock

Orthodox church leaders haven’t held such a meeting since the year 787, when the last of the seven councils recognized by both Orthodox and Catholics was held. The “great schism” then split the Roman Catholics and the Orthodox in 1054 amid disputes over the Vatican’s power.

The idea for the synod first emerged in the 1920s but preparations began in 1961. Many preparatory meetings have been held since, the last in Geneva.

Chryssavgis said the other churches attending have been puzzled about what had changed in five months to prompt the pullouts.

“”All 14 decided to come, nothing has changed but their minds,” he said.

He added that the churches attending the council could decide on a postponement when they gather Sunday, but that if they decide to proceed, any decisions they make are binding on all the churches. He likened it to the United Nations Security Council.