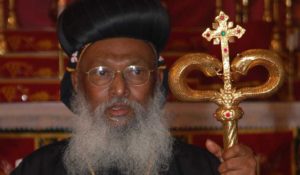 Thomas Mar Athanasios, the metropolitan of the Chengannur Diocese of the Orthodox Syrian Church, died early on Friday after falling from a train in Ernakulam. He was 80 years old.

The accident happened as Mar Athanasios was standing near the train door as he was about to alight at the Ernakulam Junction railway station. Mar Athanasios reportedly fell as the door slammed on him.

The accident happened near the Pullepady bridge between the Ernakulam Junction and Ernakulam Town railway stations.

The body of Mar Athanasios has been kept at the Ernakulam General Hospital.

Mar Athanasios became the first metropolitan of the Diocese of Chengannur in August 1985. Born in a family of priests, Mar Athanasios had been extensively involved in administration of the Orthodox Syrian Church and was also a celebrated educationalist.