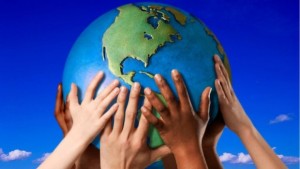 By Fr. Ernesto Obregon in The Sounding

Periodically, I am asked the question as to how I could be part of the Orthodox Church. After all, are not the Orthodox somewhat exclusive? You are not Russian; you are not Greek; you are not Middle Eastern; how could you ever be accepted by the Orthodox? I suppose that I cannot blame people for thinking that. Even for those of us who are converts, we have experienced some Orthodox parishioners who think the same thing. Why are you here?

So, let me be honest, I have experienced some Orthodox who have the same idea. And, I have even experienced some Orthodox hierarchs who have problems receiving Orthodox converts into the clergy because they do not speak the original language. And, yet, I know of hierarchs in that same jurisdiction who do not have that exacting reservation. So, what is the real Orthodoxy? Is the real Orthodoxy ethnically exclusive or is the real Orthodoxy open to those who are not ethnically descended from someone in one of the traditionally Orthodox countries? Let’s look at some history that will lay a foundation for my answer.

In the late 1800’s, the Bulgarians, Romanians, Greeks, etc., won their national independence from the Ottoman Turks, who had occupied them since the 1400’s. This was a positive development that was quickly followed by a negative development. The positive development was that a people who had been unwillingly occupied by another people were now free to pursue their own national destiny. But, there is always a danger when you win independence. The danger is that you will become overly proud of your national/ethnic/religious background to the point that you begin to see the particular expression of religion found in your country as an integral part of your national identity.

Where there were ethnic enclaves inside other nations, those enclaves identified with the Church of their ethnic background rather than with the Church in the area in which they lived. A trigger incident which led the Church to act happened with the Bulgarians. The Bulgarians established a set of parishes in Constantinople which were not only under the jurisdiction of the Bulgarians, rather than under the Patriarch of Constantinople, but were also only open to those who spoke Bulgarian and/or were of Bulgarian descent. This was a violation of more than one Early Church council which declared that dioceses were to be integral and not divided. In other words, there could only be one diocese in each area. Every Christian in that area was to be a member of that one diocese. The Bulgarians were violating this principle by establishing ethnic based parishes. In 1872, the pan-Orthodox Council meeting in Constantinople declared phyletism to be a heresy. They reaffirmed that all Christians in one area were to be part of the same Church, regardless of ethnic background.

Let me introduce you to a term called phyletism or ethnophyletism that has been around since the late 1800’s. It was a term that was coined by this Council in order to be able to explain their decision. What is it? “Phyletism or ethnophyletism (from Greek ἔθνος ethnos ‘nation’ and φυλετισμός phyletismos ‘tribalism’) is the principle of nationalities applied in the ecclesiastical domain: in other words, the conflation between Church and nation. The term ethnophyletismos designates the idea that a local autocephalous Church should be based not on a local [ecclesial]criterion, but on an ethnophyletist, national or linguistic one. It was used at the Holy and Great [Μείζων Meizon ‘enlarged’] pan-Orthodox Synod in Constantinople on 10 September 1872 to qualify ‘phyletist (religious) nationalism,’ which was condemned as a modern ecclesial heresy: the Church should not be confused with the destiny of a single nation or a single race.”

But, what the Council of 1872 did not foresee was the expansion that Orthodoxy was about to experience into the rest of the world. This expansion happened by way of emigration rather than by way of missions. It was for economic reasons, not for evangelistic reasons. And, because this expansion was not planned, it meant that many of the ethnic/nationalist/religious attitudes crossed into the New World from the original Orthodox areas, some of which had just regained their identities.

While a significant number of the immigrants were Russian Orthodox Jews or Italian Roman Catholics, etc., many were also Greeks, Eastern Europeans, and Middle Easterners, many of whom were Eastern Orthodox. For most who came here from those countries, religion formed part of their cultural self-identity, whether as an Eastern Orthodox, a Roman Catholic, or an Orthodox Jew. It was actually the religious group that helped to mediate their experience as new immigrants in a strange land while helping to maintain their identity.

“Many scholars see the space of the church for immigrant communities as not only ‘insulating,’ but as ‘providing a secure social location from which [immigrant groups]can negotiate with greater success their identities and relations with others’ (Williams 1996, 274). For instance, because Antiochian Orthodox cultural celebrations are often tied to their religious space and their identity as an ancient Christians, their cultural ‘difference,’ vis-a-vis liberal multiculturalism, can be ‘mediated’ through the space of the church (Warner and Witner 1998, 16)” [Quote from a thesis written by an Antiochian doctoral candidate].

And, now, I can finally answer the question about whether Orthodoxy is an ethnically exclusive religion.

Formally, the Eastern Orthodox Churches consider ethnic exclusivity to be a heresy. Were you to ask any hierarch (bishop) in any country in the World, they would all answer the same way. Phyletism (ethnic exclusivity) is a heresy condemned by the Church meeting in pan-Orthodox Council. Converts must be not only welcomed, but actively sought. The Church must, in addition, adapt to the country in which it finds itself, to include celebrating the Divine Liturgy in the language of the people. Clergy must be recruited not simply from the descendants of the immigrants, but also from convert groups. But, that is only a formal answer, and that is not the whole story.

For the immigrant from a country in which religion formed part of the national identity, religion ended up forming an even bigger part of their identity in the new land. To be Greek is to be Greek Orthodox. To be Serbian is to be Serbian Orthodox. To be Romanian is to be Romanian Orthodox. To be Mexican is to be a Catholic Guadalupeño (a devotee of the Virgin of Guadalupe). To allow converts into your Church (except by marriage) is to call into question the validity of your national self-identity. The parish, through its cultural celebrations and its worship that uses the language of the country of origin, reinforces the identity of the immigrant. I am still Greek (or Serbian or Romanian), even though I am a naturalized American citizen. The parish is a place of respite to which you can retreat when culture shock gets bad.

But, the parish does more than that. The parish worship and social experience strengthen you to go out to this new world, knowing that you are not the only one who is experiencing the adjustment process. The parish is the place where your children (and grandchildren) learn about your origins and experience what you consider to be important beliefs and practices. The parish festival is a place where outsiders can acquire knowledge of you, your culture, your heritage.

And the immigrant parish easily becomes ethnically exclusive. The phyletism of the immigrant parish is not a deliberate violation of the ruling of the pan-Orthodox Council. It is not a denial or repudiation of what was said back then. Rather, it is a soul-deep belief that if the parish loses its ethnic identity, then its people will lose their ethnic identity. This makes it difficult for the immigrant parish to open itself to new incoming converts, lest they lose their identity. So, many times, in practice, Eastern Orthodoxy in America can present itself as being ethnically exclusive. But, this is not a problem that is exclusive to Eastern Orthodoxy.

Neither a parish, nor a diocese, nor a jurisdiction will stay exclusive forever. Either time or events or open guided discussion can, and will, change the exclusive orientation to a more open orientation. If the phyletism of a parish is not formal, but the result of the immigrant experience, time will eventually take care of the problem, as the second, third, and fourth generations arrive and grow up. They will adjust their parish to the new reality that they are by now simply American.

In some cases, Orthodox hierarchs are taking steps to intentionally inculturate their Church. For instance, in the Coptic Church in North America – which is Oriental Orthodox, not Eastern Orthodox – , the Coptic Pope has engaged the Church in a guided discussion to ensure that the Church crosses the boundary from an immigrant Church to an American Church. “’A church without youth is a church without a future’ is an often-repeated quote of the Coptic Pope in church meetings. … This dynamic vision of the future is manifest in different adaptation measures that are palpable on the level of the local immigrant church as well as in the discourse of the Church leadership. These measures include a shift in the language of prayers in immigrant churches to local languages in order to accommodate this group; an emphasis on the ordination of priests that are either from the second generation or have been culturally localized in immigrant societies; an emphasis on involving the youth in church services and activities; and a celebration of the history of the Church and its contributions to early Christianity to instill pride in this group about their Church.”

Change will come; phyletism will recede. The current exclusivity expressed by parishes, and even jurisdictions, is neither formal nor ultimately toxic. It is rather a stage in the transition from immigrant to American.

So, why am I Orthodox given the phyletism of many parishes in America? Well, there are many reasons, Truth being among the chief one. But, also, the acceptance that I have received from parishioners in even the most phyletist of parishes, an acceptance that confirms to me that the exclusivity is neither toxic nor permanent. I have hope for the future of the Orthodox Church here in North America (and the rest of the world).