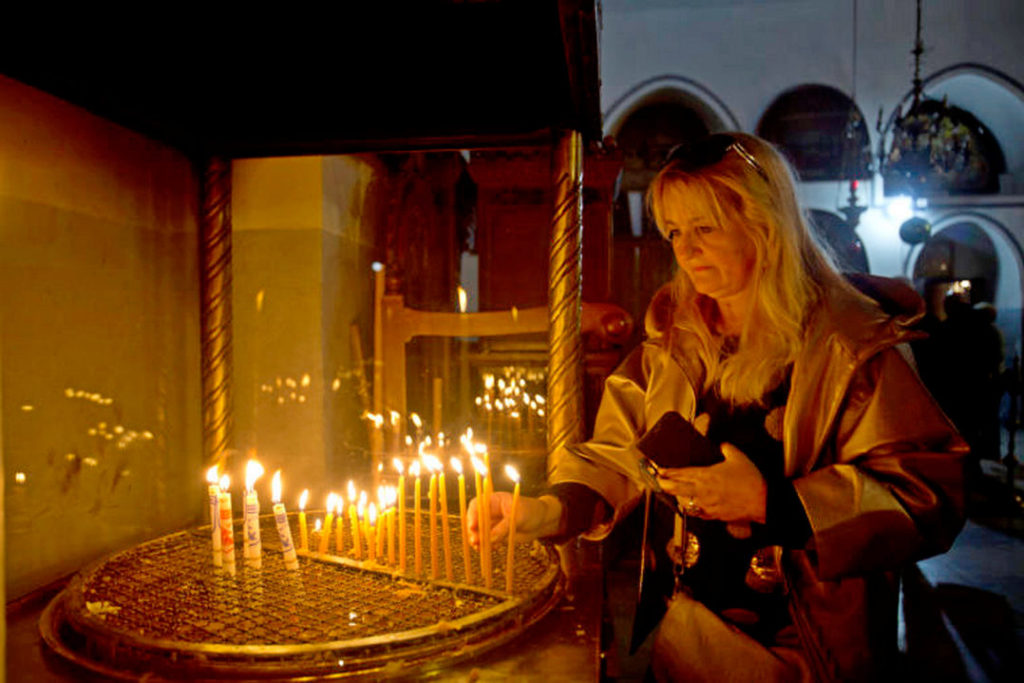 A visitor lights a candle at the Church of the Nativity built on top of the site where Christians believe Jesus Christ was born on Christmas Eve, in the West Bank City of Bethlehem, Tuesday, Dec. 24, 2019. (AP Photo/Majdi Mohammed)

In the real world, mergers are formed almost daily among small, large and even billion-dollar firms, where details, objections, and culture have to be encountered, addressed and successfully overcome.

These commercial er read mergers, secular pooling of interests, to flourish, have to overcome the differences of personalities, culture, styles, and in many cases, language.

I am addressing the failure of the ethnic jurisdictions to unite in America. Any faithful can see through this shameful charade. No ethnic bishop wants to change his current style of living, his comforts, authority, and power. Ditto the long distant Patriarchates they certainly don’t want to give up control over their satellites, the income they receive and the control they brandish over their satrapies.

In America, where freedom reigns, I call upon the far-away Patriarchates to tear down this spiritually false wall so that the AGOC may flourish and do the work of Christ, unfettered by your specious, deceitful and beguiling arguments clothed in fictitious spiritual speech.

Now the Orthodox faith was formed over 2,000 years ago in honor and adoration of Christ by a small and ever-larger group of followers. People – women, men and children–just like you and me, followed Christ and adored him. So, from simple austere beginnings and surroundings, this following grew into levels of an unmanageable octopus.

The opulence of the robes and gowns which embellish our hierarchy are of historical significance and reminiscent of the royal dress of those earlier days. Please tell me how these trappings bring the faithful closer to Christ when He wore the simple clothes of His people.

Then, too, there is an obligation for our men of the cloth to grow a humble beard, which should be optional, to signify a desire to emulate Christ. So what is the case of the hierarchy who delight in their long, unkempt straggly imperials? It’s tradition!

Hold on now—don’t run away lest you think I am nuts. I believe in our Orthodox dogma. What I am pointing out is the disconnect of the hierarchal administrative adherence to man-made traditions which in today’s world are imperious, self-indulgent and ill-suited to retain and maintain our people in the Orthodox faith let alone serve as a beacon for outsiders searching for Christ. Remember, once again 90% of Greek Orthodox have left the faith.

Our bishops and above almost seamlessly have taken control of the Orthodox Church inconsistent with the practices and patterns employed in the Church’s earlier days. There were times in the recent past that I felt our church was too spiritually precious to leave it in the hands of the hierarchy.

Yet it appears that our esteemed Patriarch seeing the near demise of the American Greek Orthodox Church during the spiritual reign of A.B. Dimitrios advanced the rank of Metropolitan to our American bishops in effect severely tightening his realm of authority in America and thereby restraining the rule of the A.B.

This change in the spiritual lineup of the American bishops seemed like a great solution at the time. But as it is now apparent with an enthusiastic, spiritually-minded and gifted A.B. Elpidophoros, this alinement must be reversed to its original status. However with the way the church works, this will probably happen after our lifetime.

As we look ahead, I honestly don’t see a worthy successor to A.B. Elpidophoros except for Metropolitan Nathaniel of the Chicago Diocese. From now on, the AGOC deserves a 100% American-born hierarchy. HCHC must be raised to the educational and spiritual level to offer candidates equal to or better than proffered from abroad. If not, is the HC Seminary a status quo school existing to educate clergy only for the comprehensive parish level? Shame!

All too often in the past 25 years, we faithful have been faced with menacing constraints as in the disappearance of almost 90% of the Greek descendants, the educational stability of HCHC, the loss, theft of funds at the Archdiocese and its subsequent halting of the work of the St. Nicholas Shrine.

These near devastating blows to our blessed American Church were the result of the hierarchical indifference, malfeasance, and ignorance, while our “esteemed” Patriarch-appointed metropolitans sat indolently in raising to safeguard and secure our falling Cathedral. Yes, I believe in prayer; however prayers without action spells 25 years of frustration.

Our learned A.B. should gather these issues and address them individually to the faithful. I have tried hard to not be adversarial or mean-spirited but am seeking answers as a very petulant child would ask of a parent. Many thanks to the hardworking parish clergy today, of course; and a special acknowledgment of indebtedness is due them during the long drought of hierarchical leadership.

On another note, to be honest, I was very dismayed at my attempt to have a hard copy of the Archdiocese financial report as given to the AC. I tried to recover a copy on the Web—being told to obtain it there–but was frustrated at the convolutions I had to battle and gave up. It seems that the “old guard” is still operating, in control of the Archdiocese finances, and the words of responsibility and transparency are just words only in speeches and not deeds.

Then again, one has to understand the “Greek” code of behavior and discipline when one observes the manner and timing of Fr. Christopher Metropolis’ expulsion from HCHC. What! Two days before Paska and was not permitted to serve in any Holy Week recitals. Ok, so Fr. Christopher Metropolis was perhaps not the person to turn HCHC around. But how could he manage HCHC, as he apparently didn’t have the authority to eliminate the 100 or so clergy and teachers hanging around who had united as a formidable block toward any changes at the schools. Fr. Christopher Metropolis deserves the gratitude and respect of all Orthodox Christians for the exemplary work he has done at OCN, Orthodox Christian Radio. What a haughty, indignant and shameless way to dismiss this gifted priest. Kudos to the beautiful land of America?

Once more, about the Orthodox Christian Laity (OCL). These are people of which I am proudly one, also having had the honor of serving as its president for two years. OCL includes within its membership, Orthodox faithful across all major ethnic jurisdictions including Orthodox clergy; and has labored with websites, printed materials and meetings to initiate a threshold force toward Orthodox unity. In the beginning, the GOC establishment was very warm and welcoming to the OCL. However, when the GO Archdiocese found that the OCL desired to work as an independent OC organization, pursuing the goals of openness, responsibility, and transparency and the unity of the diaspora jurisdictions in the Orthodox church, it became a pariah, to be cursed, denied and ignored by the very church OCL vowed to defend, celebrate and safeguard, but at the same time pursue its goals of openness, transparency, and responsibility.

So it went after almost 30 years until just recently His Eminence A.B. Elpidophoros invited the OCL leadership to a meeting in New York, which was spiritually very uplifting. Then at the annual meeting of the OCL in Houston, His Eminence Metropolitan Isaiah presented the keynote address. Hallelujah! These meetings, events must have been ordained by God! We of the OCL are grateful and pray that the concept of reverence, humility and respect with the church will continue and strengthen, and serve a common purpose in our faith.

I approach the Lord and speak simply and with candor. I humbly speak to Him as I would to clergy, hierarchy, family or friend. I tell Him clearly what is on my mind as He loves the truth.

The Creator of the universe is lying in a manger of straw. Is there any wonder people grapple with this truth? The coming of the Savior begs from everyone a response. The world we know has changed forever and we can no longer sit on the sidelines.

Mr. Nicholas Karakas, a prominent businessman and philanthropist, is well respected for his many contributions to the Greek American community and for his benevolent philanthropic pursuits, and has received numerous commendations for accomplishments in business, education, and community service.

Karakas helped found the chair of the Greek Professorship which bears his name at the University of Missouri, St Louis. He and professor of Byzantine Music, Diane Touliatos secured the $550,000 to fund the Professorship Chair.  In 1988 he was awarded the presidential Gold Cross of the order of the Phoenix, the most notable commendation conferred by the Hellenic Republic, for his contributions to the cause of Hellenism and to the culture and nation of Greece.

He is a recipient of various medals and awards from the University and has also been awarded with an Honorary Doctoral Degree.

He is also co-founder of the Karakas Family Foundation with his brother Tony Karakas an organization which has awarded scholarship grants to needy college students.  Currently, by the twenty-first year of its existence, the Foundation has awarded over 350 scholarship grants to young students.  For the first six years has donated money to winners of the National St. John Chrysostom  Oratorical festival sponsored by the Greek Orthodox Church.  Mr. Karakas is responsible for the establishment of the Mathews-Dickey Endowment Fund, an organization dedicated to the service of 40,000 children in the inner-city St. Louis.  He is one of the founders of the Hellenic Spirit Foundation, comprised of a benevolent group of Greek Americans who organized various events ranging from community service to musical performances and educational programs.  The Spirit annually for Ten years has honored outstanding Greek Americans such as John Catsimatides, Ike Pappas, Admiral Kallares among other notables.