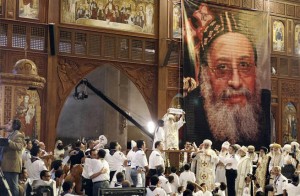 Sunday is the Orthodox Palm Sunday, celebrating when Jesus returned to the city of Jerusalem. The day is known as  Shaa’nineh in Arabic and is one of most important dates in the Orthodox religious calendar.

The event enables families to come together celebrate mass, and the day is traditionally a familiar affair and an excuse to cook up a good feast and is well celebrated across the Levant nations of Israel, Jordan, Lebanon, Palestine, Syria and beyond.

Palm Sunday also starts the Holy Week, the run up to Easter.

The Middle East though, long associated with Muslims, has a wealth of Christian traditions. With dwindling numbers some Christians are increasingly feeling marginalized.

Coptic Christians in Egypt have come under particular stresses, inspite of President Mohammed Morsi saying that he will be the president “for all Egyptians”. Attacks have been frequent and often violent. On the holiday of Palm Sunday, the coptic pope in Egypt, Pope Tawadros II, warned that many are considering emigrating after months of attacks.

Last week, Syria witnessed a worrying development for Christians the world over, as two bishops were kidnapped in Aleppo. Reports suggested the two had been released,  but this has yet to be confirmed and the pair remain missing.

Across the region, there are some signs of good news, however. In Jordan, the minority Christian population celebrate the feast day freely, even with legally enshrined rights enabling workers to enjoy time with their family. Inspite of this Jordan remains divided with little cross-religion love.

As ever with the tumultuous Middle East, there is much to be concerned about, but there always remains a little ray of sunshine on a spring Palm Sunday for the Christians across the region.