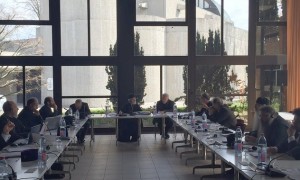 With the blessing of His Holiness Patriarch Kirill of Moscow and All Russia, the Russian Orthodox Church will be represented at the Pan-Orthodox Secretariat by archpriest Nikolai Balashov, vice-chairman of the Department for External Church Relations. Rev. Anatoly Churyakov takes part in the meeting in his capacity as the DECR interpreter.

Share. Twitter Facebook Pinterest LinkedIn Tumblr Email
Previous ArticleThe Challenge of Easter: Whether you’re a believer or not, there is no way to ignore the radical claim of the Resurrection
Next Article ORGANIZATION AND WORKING PROCEDURE OF THE HOLY AND GREAT COUNCIL OF THE ORTHODOX CHURCH